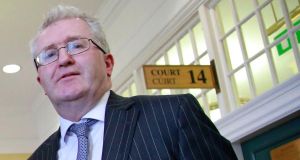 Controversy around Mr Justice Séamus Woulfe’s attendance at the Oireachtas golf dinner in August has led to a crisis in the State’s highest court. Photograph: Nick Bradshaw

Taoiseach Micheál Martin is due to meet all the party leaders on Friday afternoon to discuss the crisis in the Supreme Court and to seek consensus on how to move forward.

The leaders of the three coalition parties were expected to meet with Attorney General Paul Gallagher on Thursday or Friday morning to discuss the issue and consider any proposal that could be made to the all-party meeting.

Political sources said the delay in meeting opposition leaders would allow the political temperature surrounding the issue to cool. However, both Government and opposition sources believe that a motion seeking the impeachment of Mr Justice Woulfe is inevitable and they will be forced to take a position on the issue.

Rise TD Paul Murphy, who is part of the Solidarity-People Before Profit grouping and has previously said the judge should resign, said his group would wait to see what the Taoiseach proposed. However, Mr Murphy has not changed his view and if there is not a motion to impeach arising out of Friday’s meeting, he may go ahead and lodge a motion himself, as is any TD’s right.

The Dáil would then have to vote to accept any motion and begin the impeachment process, or reject the motion and effectively throw the crisis back at the Supreme Court to resolve.

Though many senior figures said they expected the affair would only be resolved by the resignation of Mr Justice Woulfe, there was a noticeable backlash on Thursday among many TDs who expressed no appetite for the process of removing a judge by the Oireachtas.

Several TDs, speaking privately after a warning by the Ceann Comhairle not to comment publicly on the issue, said they believed the affair had been blown out of proportion by the Chief Justice telling Mr Justice Woulfe he should resign. Even though many TDs acknowledged the issue was now up to politicians to resolve, there was little appetite for the lengthy and complex process that would result from a vote to start an impeachment.

Many TDs and Senators from the two main Government parties and beyond expressed serious doubts whether Mr Justice Woulfe’s attendance at the golf dinner in August, and the nature of his apology, had reached the threshold of “stated misbehaviour” which would be required if he were to be impeached.

In an impeachment process, standing orders of both Houses of the Oireachtas allow the Dáil and the Seanad to establish separate select committees (which may be merged into one committee chaired by a TD) to establish the facts of the matter under consideration.

The committee then reports to both Houses and they must separately consider impeachment. All members of both Houses must act independently and cannot be made subject to a party whip in this process.