Taoiseach was not told of judges’ interest in Supreme Court role 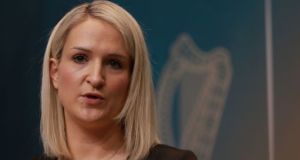 Taoiseach Micheál Martin has said he was not told that a number of serving judges had expressed an interest in the vacant seat on the Supreme Court that was eventually filled by Séamus Woulfe.

Mr Martin will today meet other party leaders to seek to collectively agree how to deal the controversy surrounding Mr Woulfe after the Chief Justice Frank Clarke expressed a view that the Supreme Court judge should resign.

Mr Woulfe has refused to resign and, as the Chief Justice has no authority to remove him, the issue has moved to the political sphere and the Oireachtas must decide whether to impeach him.

Mr Martin said he was not contemplating impeachment right now, “that is a matter ultimately for the Oireachtas to decide” and he would not pre-empt the discussion.

However, following the publication of a report in The Irish Times today, there is renewed focus on the process by which Mr Woulfe was appointed.

On Friday morning, The Irish Times reported that a number of senior judges wrote to the Government to express interest in the Supreme Court vacancy that was ultimately filled by Mr Woulfe, but the Cabinet was not told of their applications before he was selected in July.

A spokesman for Minister for Justice Helen McEntee confirmed she considered expressions of interest from serving judges, and other judges eligible for the position, before recommending Mr Woulfe to Cabinet on July 15th.

Ms McEntee brought that recommendation to cabinet on July 15th, and the then government decided to nominate the former attorney general. “Discussions at cabinet and with ministerial colleagues are confidential,” the spokesman added.

Earlier, the Opposition called on the Taoiseach and Ms Helen McEntee to make “urgent statements” on the process that led to the appointment of the former Attorney General Mr Woulfe as a Supreme Court judge.

Catherine Murphy, the Social Democrats co-leader, said this morning Mr Justice Woulfe had no judicial experience and the fact that he went straight to the Supreme Court “raised questions at the time”.

“The process seems very flawed, and it looks to me that the Minister for Justice has questions to answer,” Ms Murphy told The Irish Times, after the story emerged.

Ms Murphy said she wanted to know more about the criteria used when considering who should be nominated, who was involved in the decision, why Cabinet members were not told about the level of interest in the role and whether nomination process for Mr Woulfe differed from previous appointments.

She pointed out that she had an oral question on Mr Woulfe’s appointment ruled out of order when put down in July.

Alan Kelly, the Labour Party leader, called on both Ms McEntee and the Taoiseach to make urgent statements on the process. Mr Kelly said the reason other Cabinet members were not informed that sitting judges had put their names forward needed to be outlined.

“This morning it has been revealed by The Irish Times that the Minister for Justice did not inform her Cabinet colleagues on July 15th that at least three judges had applied for the vacancy on the Supreme Court which is an incredible development in the controversy over Justice Woulfe,” he said.

He pointed out that the Cabinet handbook stipulates that appointments to the judiciary, the Taoiseach, Tánaiste and other party leaders, as well as the Minister for Finance and the Attorney General, should be informed in advance of the proposals to make such appointments.

“As the highest court, is it only natural that the bulk of applications would come from serving judges in lower courts. Did none of the party leaders or other Cabinet Ministers think to ask why no names of sitting judges were brought forward or had the appointment of the former Attorney General been agreed in advance?,” Mr Kelly said.

A spokesman for Ms McEntee confirmed she considered expressions of interest from serving judges, and other judges eligible for the position, before recommending Mr Woulfe to Cabinet on July 15th.

Mr Woulfe served as Attorney General in the previous government until it left office on June 27th.

Mr Kelly also called for clarity from Fine Gael leader Leo Varadkar on his knowledge of the matter.

“The Tánaiste was aware that the outgoing Attorney General had applied for the position and we need to know did he discuss it with the Minister for Justice in advance. If other party leaders were misled then it is a breach of 2.15 of the Cabinet Handbook concerning Judicial Appointments.”