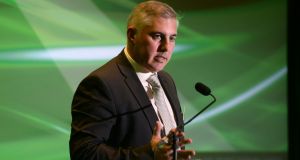 The haulage industry has urged the Government to create a parking area near Dublin Airport where lorries could be stacked if there is Brexit-related traffic congestion at Dublin Port.

Dublin Port Company and Transport Infrastructure Ireland, which manages the road network, are drafting a contingency plan called Operation Purge to send lorries north through Dublin Port Tunnel to avoid traffic building up at the port and in the city should there be delays after the UK leaves the EU.

Strict health and safety rules mean that the tunnel has to be closed if it becomes congested. The purpose of the plan is to keep the traffic flowing through the tunnel to ensure new post-Brexit border checks do not lead to congestion.

The port company is concerned that insufficient manning of State Border checks and inspection posts, incorrect paperwork submitted by importers and exporters, and multiple ferry arrivals could lead to traffic delays within the port.

There are no plans as yet to accommodate lorries at a dedicated site, though the Department of Transport earlier this year briefly explored the possibility of using one of the long-term car parks at Dublin Airport for this purpose.

The loss of about 10 hectares of land to new Border infrastructure for customs and food and animal health checks for UK imports after Brexit has reduced the availability of space in the port to accommodate parked trucks.

“I understand that you can’t have traffic jams in the tunnel and you have to manage issues around the port but drivers need somewhere to go,” said Aidan Flynn, general manager of Freight Transport Association Ireland.

“There needs to be welfare facilities for drivers around the port. They need toilet and rest facilities. We don’t know how long they are going to be delayed. If they are getting stopped by the Department of Agriculture, they may be taking samples of food product and that could take hours of delay and that has implications for hours of work.”

He suggested that ferry arrivals could be staggered to avoid traffic build-ups. About 8km lanes of traffic disembark at Dublin Port every six hours with the arrival of two ferries, operated by Stena Line and Irish Ferries, arriving from Holyhead.

Verona Murphy, president of the Irish Road Haulage Association, said that the container terminals at Dublin Port could operate for longer times during the day and give hauliers times to come into the port to alleviate congestion.

Ms Murphy, who is based in the southeast, said the State should develop Rosslare port as “another viable port to travel to” in an effort to reduce pressure on Dublin where about 90 per cent of the State’s freight traffic moves through.

“Continued congestion on a daily basis is something that we cannot tolerate and continue with because it is affecting our ability to make money based on the tacograph hours,” she said, referring to the highly regulated driver hours.

“Some hauliers have complained that their income has dropped by 50 per cent because of the congestion.”

A spokesman for the Department of Transport said that it was finalising contingency plans for the October 31st Brexit deadline to respond to any traffic management issues at the port.

“The plan will identify a range of mitigation actions, including a number of potential HGV holding sites, in the event of an escalating congestion problem within the port,” he said.

“These actions will be implemented as and when specified trigger points are reached.”