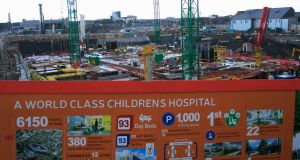 The National Children’s Hospital is now facing construction delays that could end up adding millions more to the final cost of the project. Photograph: Gareth Chaney/Collins.

The National Children’s Hospital is now facing construction delays that could end up adding millions more to the final cost of the project.

The hospital, which is being built on a site at St James’s Hospital in Dublin, has been at the centre of a major controversy due to huge cost overruns.

The bill for the project has risen from an estimated €800 million in 2014 to €1.4 billion, which is expected to increase to some €1.7billion when other costs are factored in.

Fred Barry, the chair of the hospital’s development board, told the Oireachtas Committee on Health the project was now facing construction delays.

He said that for each month the project is delayed past its completion deadline in 2022, the costs would increase by several million euro.

“Some of the work is behind the original programme, some of it isn’t, there probably isn’t any one single reason for this, it’s a very big job,” Mr Barry said.

“They are getting our attention, I wouldn’t like to be alarmist about it, it’s quite early in that phase of the construction.”

However, he said that over the three years of construction there would be “plenty of opportunities to mitigate any delays to date”.

Mr Barry replaced Tom Costello, who resigned as chair of the hospital development board in February. Several other senior figures have stepped down, including the project director, construction director and two other board members, he said.

Mr Barry said the delays were a result of congestion on the site, arranging subcontractors and hiring labour.

“We’re building everywhere on the site. . .Everyone knew this going into the project. The reality when you actually encounter it can be a bit more difficult than had been anticipated.”

The main contractor, BAM, had also submitted a “considerable number of claims” for extra fees and extensions of time, Mr Barry said.

“There will always be rows in construction over cost and time, it’s in the nature of the industry. I would say the main contractor on the job, BAM, is probably a little more active in this regard than many other contractors are,” he said.

Mr Barry warned that rising inflation in the construction sector posed the greatest risk to costs of the project increasing further.

Fine Gael TD Bernard Durkan said the increased project costs to date were due to an initial underestimation, rather than an overrun.

Fianna Fáil health spokesman Stephen Donnelly criticised the “extraordinary” statement from Mr Durkan as “Orwellian doublespeak”. He said the attempted “re-categorisation” of the substantial cost increases as anything but an overrun was an “insult” to taxpayers.

Department of Health officials said work on tri-locating a maternity hospital at the site could not commence until the children’s hospital was completed.

1 Coronavirus: Republic reports 14 further deaths and 212 new cases
2 Tony Holohan admitted to hospital after feeling unwell during coronavirus briefing
3 ‘On the bike I meet no one’: 78-year-old cyclist refuses to cocoon
4 ‘Everyone still thinks it’s a joke’ - parents of toddler with coronavirus speak out
5 Coronavirus in Ireland: New powers of arrest for gardaí expected to come into force
Real news has value SUBSCRIBE