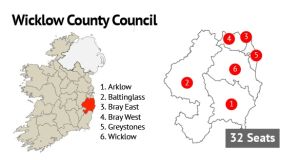 The final seat on Wicklow County Council has gone to the Labour Party after a dead-heat between the last two remaining candidates resulted in a two-day recount.

Former TD Anne Ferris was formally declared the winning candidate on Tuesday evening after gaining one extra vote to put her ahead of first-time Independent and former Fianna Fáil member Malachaí Duddy.

The two candidates in the Bray East local electoral area finished the original ninth count on Sunday night with 1,006 votes each but a recheck of ballot papers turned up one extra previously uncounted vote for poll-topper Steven Matthews of the Green Party.

When the transfers were tracked through the revised counts, it was an extra vote from the surplus of Sinn Fein’s Grace McManus that eventually put Ms Ferris ahead in the eighth count.

Following the declaration of the results, the losing candidate, Malachaí Duddy, spent some time consulting with his legal advisers before requesting a further recount but this request was denied by the returning officer. He now has the option of challenging that decision in the courts.

Overall, the election result in Wicklow was a relieved Fine Gael, a happy Labour Party and a disappointed Sinn Féin and while there were no major upsets, the complexion of the council has changed in significant ways nonetheless.

Fine Gael gained one seat, bringing its total to nine, so at least the party can say its pre-election predictions of securing extra councillors were correct in some areas.

Labour secured two seats which, after the bruising 2014 elections when the party lost all six of its seats, constituted a major success.

The Green Party doubled its representation to two, in keeping with national trends, and the Social Democrats held on to their single seat while Fianna Fail also retained their seven.

Sinn Fein managed two - a long way short of the six they achieved in 2014 although the party has been riven by internal disputes and expelled three councillors in 2017, two of whom have held on to their seats as independents.

But while it is business as usual in that Fine Gael and Fianna Fail continue to dominate local government in the county, it is a younger and more diverse council that will be convening for the first time next month.

Previously, women held just seven of the 32 seats but they now occupy 12, including four in the previously all-male Bray wards and one in the all-male Baltinglass ward.

There are also more young councillors in Grace McManus, 27; Rory O’Connor, 20 and Avril Cronin, 29, and Ms McManus also makes a bit of local history by being the first openly gay public representative on the council.