Miriam Lord: Leo is keeping the fiscal Barbarians from the gate 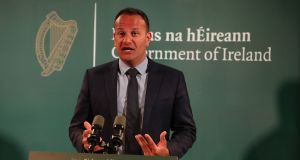 During Leaders’ Questions, the Taoiseach continued his pattern of slightly patronising his opposite number. Probably because he knows this annoys him. Photograph: Liam McBurney/PA Wire

When the Noel Bowl is built in Galway, the Baa-Baas will not be invited to play a Connaught selection at the new venue unless there is a change of attitude at government level.

“We’re keeping the Barbarians from the gate. Seriously” stressed the Taoiseach in the Dáil, smiling broadly and raising both palms in the air in a pushing back gesture.

Of all the topics which might have been raised at Leaders’ Questions yesterday – kicking off the first Dáil sitting of June – rugby was not expected to be one of them.

The topic which the Leo Varadkar and most observers thought would figure strongly never came up at all. This concerned the Irish Fiscal Advisory Council’s rap on the knuckles to the Government for not sticking to its recommended spending guidelines. So Varadkar mentioned it in passing anyway because he doesn’t like criticism and it was obviously niggling him.

A request from Noel Grealish, Independent TD for Galway West, for government funding for Connacht Rugby’s proposed new stadium, gave him the chance to explain how difficult it is to remain within the fiscal parameters when Opposition deputies are making demands.

The Fianna Fáil leader is looking for money for the Defence Forces this week and will want more for God knows what next week.

It’s tough to hold the fiscal line, Leo explained, still coming to terms with the unforgiving demands of senior hurling as he approaches his second anniversary in the top job on Friday.

Speaking of hurling, Grealish also brought up funding for “Oranmore-Maree G-Ah-Ah club”, currently embarking on an ambitious €4 million redevelopment project. This is to go with the €34 million project envisaged by Connacht Rugby, which needs a €20 million injection from government.

Before anyone accused Galway of being greedy, Noel pointed out the facilities will benefit all of the west of Ireland, a region which has not enjoyed the largesse bestowed on other parts of the country when it comes to sport.

It’s time for the west to benefit. Not least because Connacht Rugby is flying at the moment and Oranmore-Maree G-Ah-Ah club recently won the All-Ireland intermediate club hurling championship.

“I want to compliment the chairman, Gerry Rabbitte, and the manager, the great Gerry McInerney, on their success.”

“Yahoo,” went the chamber and there was a smattering of applause.

While Leo agrees there has been underinvestment in sporting facilities in the west, he couldn’t promise Noel anything. But the projects might get a slice from the major sports infrastructure fund later this year.

“I expected to have to come in here today and defend the Government against criticisms that have been made against us by the Irish Fiscal Advisory Council,” he admitted, saying his government intends to heed that criticism in the face of constant opposition spending demands.

“We’re keeping the barbarians from the gates. Seriously.”

There was certainly a touch of the barbarian from the Taoiseach to his main Opposition counterpart. It’s almost as if Leo is trying to provoke Micheál Martin into pulling out of their agreement to keep the Government going until the budget.

During Leaders’ Questions, the Taoiseach continued his pattern of slightly patronising his opposite number. Probably because he knows this annoys him.

“I’m sorry, deputy, if you’re angry and upset once again” he condescended to Micheál, who wasn’t exactly on the warpath. “Perhaps if the deputy can calm down for a moment, contain himself . . .”

But later, when the House was discussing the recent elections and plebiscites, Leo cut loose. He was fairly vicious too.

“I deeply regret that Cork narrowly voted against having a directly elected mayor” he said, looking across at the deputy for Cork South-Central while musing that a number of things could have delivered a different outcome.

“One of those things would have been you actively campaigning for a Yes vote.”

“So it was all my fault” marvelled Micheál, shaking his head in disbelief.

When “defeat is narrow” it just needs one of any number of things to produce a different outcome, repeated Leo.

“I supported it. You didn’t do your homework” protested Micheál, his voice going up a little higher.

Minister for Housing Eoghan Murphy, who was nodding along vigorously as the Taoiseach spoke, jumped in: “Did you support it?”

“I did” repeated Micheál, in his finest Cork tones.

“Yes!” cried Micheál, putting about three syllables into the word.

Leo stuck the knife in: “Deputy Martin was asked to take part in events with Minister Coveney . . .”

Murph furiously nodded in support of his main dude.

“No. I got a phone call two days before polling day when the die was cast” reposted Micheál, shaking his head and looking across to Labour leader Brendan Howlin as if to say: “Do you believe this?”

Leo went in for a low blow. “Unlike Deputy Niall Collins in Limerick who showed real leadership.”

Brendan Howlin know what the Taoiseach was at. “Share the blame!”

No, insisted Leo, Niall Collins took part in the campaign and helped to get Limerick over the line.

“And my sense, deputy Martin, and I’m sorry to say this, is that you secretly wanted the plebiscite to be defeated in Cork because you hoped it would make the Government look bad.”

“I voted for it” said Micheál.

But Leo wouldn’t stop. “And you showed no leadership on this matter.”

Micheál let Limerick city and county “get a head start over Cork,” charged Leo, rubbing it in. “I think you really let down your city in this regard because of the lack of leadership you showed, unlike Niall Collins who showed much more leadership than you on this matter.”

Micheál hit back. “Your appointment of Senator Buttimer [in Cork] as your director of elections was your most inspired one in many years.”

“That was a personal attack” he drawled, stopping short of challenging Micheál to a duel. “It is very unbecoming.”

“ I voted for it; you made a bags of it” shouted Micheál.

“You didn’t campaign for it” sulked Murph.

“We haven’t seen you in eight weeks” harrumphed Darragh.

Leo still wouldn’t let it go. “It could have passed if you’d shown some leadership like Niall Collins did and I’m sorry you didn’t.”

Wisely, Micheál gave up. He said he’d pass on his good wishes to Niall.