Inside Politics: Uninhabited rock has long been the subject of territorial disputes between Ireland and Scotland 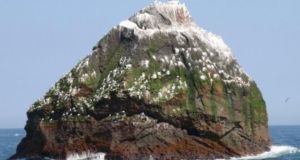 Rockall: an outcrop in the middle of the Atlantic

Late last night the Government issued a statement informing the nation that dialogue on Rockall was continuing between the Irish and Scottish governments.

“There have been close contacts at official level over recent days. It has now been agreed that a process of intensified engagement will take place, led by senior officials from both administrations.

“The Irish Government has consistently said this matter should be dealt with through diplomacy and agreement. We are hopeful that on this basis the latest difficulties can be de-escalated.”

In houses all over the country, there was a collective sight of relief as it now seems whatever was going to happen outside diplomacy and agreement had been “de-escalated”.

Was this rocky outcrop going to provide our Pig War, where a hog shot dead on contested island called San Juan in 1859 almost led to a mini-war between America and Britain, both of which claimed ownership.

Rockall is an outcrop in the middle of the Atlantic, more than 200 miles from the coasts of Ireland and Scotland. It is less than 20 metres high with a circumference of about 100 metres.

Despite the fact it is uninhabited, it has long been the subject of territorial disputes between Ireland and Scotland. The British claim to have annexed it in 1955.

In 1975, a group of Irish seafarers sailed to the rock, where a young rock climber on the crew, Willie Dick, climbed to the top. Here is Dean Ruxton’s excellent report on that trip.

The independent Dublin politician Sean Loftus included Rockall in his name along with “Dublin Bay” back in the 1980s.

Why this unseemly squabble over a rock? Well for a long-time it seemed to be all about mineral rights, particularly to do with oil exploration. But now it’s all about fishing. If the rock is British territory, they can claim a 12-mile exclusion zone. Apparently because there is land there, it means the surrounding seas are replete with species of fish not usually found in deeper Atlantic waters.

Ireland, of course, disputes the British claim of sovereignty, saying it does not amount to anything given the island is uninhabited and uninhabitable.

Here is the Scottish view from Alex Massie where it is stated Holyrood is stupefied at the Irish reaction.

Over here there is similar stupefaction. Why the sudden Scottish aggression? The political undercurrents seem to do with the Scottish fishing industry, and its relationship with the Scottish National Party (SNP), the popularity of which has been falling.

The fishing industry there has been at odds with the SNP over Brexit and, for some, it is seen as an attempt by the party to reach out to Scottish trawlers.

Fishing is an emotive issue in the world of politics. There has been similar ructions over here recently over the ‘voisinage’ agreement that allowed boats from Northern Ireland to fish in southern waters, much to the annoyance of southern fishermen.

Brexit returns with a vengeance

There’s no doubt there is a Brexit element to the Rockall row. And it is Brexit that is writ large in our politics, here and in Britain.

During the election cycle there was a bit of a lull, but the issue has come back with a vengeance in recent days. Our main lead today by Pat Leahy and Marie O’Halloran highlights an expert report that concludes Northern Ireland business would struggle badly in the event of a no-deal Brexit.

The report written by two lawyers who specialise in EU law says the effect on smaller business would be most grave, with many not having the ability to negotiate the bureaucracy involved.

Taoiseach Leo Varadkar had some very telling warnings about all the talk among Tories about a no-deal Brexit. He said it would be “terrible political miscalculation” for anyone in London to think they will automatically get a better Brexit deal after Westminster’s failure to ratify the withdrawal agreement.

“That is really to misunderstand how the European Union works,” he said.

In Westminster the leadership contest for the Conservative Party has begun in earnest. Front-runner Boris Johnson is expected to break a very uncharacteristic silence later today when he unveils his campaign. The most interesting candidate in the race, Rory Stewart, also launches today.

Johnson has been quiet mainly because silence ensures he makes no embarrassing gaffes. But at the launch today he will have to field questions, and some will undoubtedly be about his admissions to having tried cocaine. Michael Gove’s admission he took cocaine seems to have stalled his campaign.

Yesterday, home secretary Sajid Javid, tried to inject momentum into his campaign by launching a video detailing his rise from humble beginnings to his present position. As of this morning, it had been viewed 250,000 times.

Johnson has promised to leave the EU by the end of October. Already we are beginning to see the lack of realism that was a trait of May’s premiership.

Over at Labour there is a similar air of unreality where Jeremy Corbyn and his shadow cabinet continue to give out different and confusing messages over Brexit. Now the party will table a motion to stop a new prime minister leaving without a deal. Still there is little credibility to its milk-and-water stance.

Fiach Kelly reports that four byelections could be held by Christmas. The important point is that the prediction of some that a general election would happen first does not seem to be correct.

Pat Leahy on how Paschal Donohoe might respond to the latest robust report from the Irish Fiscal Advisory Council.

Miriam Lord: On Leo, the Barbarians and the Noel Bowl, otherwise known as the plans to give Connacht rugby a new home.

Kevin O’Sullivan reports on a speech by President Michael D Higgins in which he said Ireland would stand behind small island states who were most vulnerable to the impact of climate change.

Kathy Sheridan says the bar is getting lower in the Tory leadership contest.

10.30: Parliamentary Questions to Minister for Culture, Heritage and the Gaeltacht Josepha Madigan.

16.05: Private Members’ Business from Fianna Fáil with a motion on Defence Policy.

Statements on the allocation of Home Help hours (to conclude within 87 minutes).

9.00: The Committee on Health will discuss a review of the development of the new children’s hospital and the delivery of services at the urgent care centre in Connolly Hospital. In attendance will be representatives from Children’s Hospital Ireland and representatives from Dept of Health, the HSE and the National Paediatric Hospital Development Board.

9.30: The Committee on Housing, Planning and Local Government will discuss family and child homeless with representatives of NGOs.

13.30: Joint Committee on Culture, Heritage and the Gaeltacht will engage with Prof Kevin Rafter, chairman designate, the Arts Council. It will also examine the threat of extinction of one-third of the native bee population and related matters, with representatives of the Federation of Irish Beekeepers Associations

14.00: Joint Committee on Communications, Climate Action and Environment will discuss an investigation to examine the National Broadband Plan process thus far and how best to proceed and the best means to roll out rural broadband. Representatives from Analysys Mason will attend.