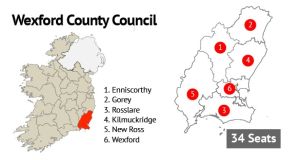 The shocking and the predictable stood in stark contrast in Wexford as the cheering of elected candidates rung out over the weekend. With six local electoral areas and 67 candidates, there was triumph and despair as the counts came in.

Sinn Féin’s fortunes around the county were a big point over the weekend as they lost three sitting councillors. Fionntán Ó’Súilleabháin scraped over the line in Gorey to retain his seat, as did Tom Forde in Wexford. Mick Roche hung in until the last count in Rosslare, but ultimately lost out to Aontú candidate Jim Codd. Marie Doyle didn’t gain much momentum in New Ross before being eliminated, while first-time candidate Colette Nolan also missed out in Kilmuckridge.

Perhaps the biggest shock for Sinn Féin, however, was the failure of their general election candidate Johnny Mythen to retain his seat in Enniscorthy. However, he wasn’t the only high-profile candidate to miss out in the area. Current county council chairman Keith Doyle, who has been involved in local politics for 25 years, also lost his seat, as did Fine Gael councillor of 10 years Paddy Kavanagh.

In fact, in Enniscorthy, it was only Kathleen Codd Nolan (FG), John O’Rourke (IND) and Barbara Anne Murphy (FF) who retained their seats on a new-look council that will feature cousin of TD James Browne, Aidan Browne (FF), Cathal Byrne (FG) and Jackser Owens (IND) who had previously served on Enniscorthy Town Council.

With a hint of predictability, European hopeful Malcolm Byrne (FF) topped the poll in Gorey, but will be hoping not to take up his seat as the European count continues. He was joined by Fine Gael duo Anthony Donohoe and Diarmuid Devereux before Donal Kenny and Joe Sullivan made it a clean sweep for Fianna Fáil in the district with Sinn Féin’s Ó’Súilleabháin also getting in on the last count. Labour veteran Robbie Ireton failed to retain his seat, which was a shock.

One of the more dramatic areas was Rosslare. Ger Carthy comfortably topped the poll with over 20% of first preference votes and was closely followed by Frank Staples (FG) on count two. Fianna Fáil general election candidate Lisa McDonald faced an anxious wait before being elected on count seven and then things took a turn when Fianna Fáil candidate Michael Wallace called for a recount with some 20 votes separating him and Sinn Féin’s Mick Roche, who was battling Aontú’s Jim Codd. The call was eventually retracted and the new party on the block claimed the new seat as the Rosslare public gave Codd the nod.

Wexford reaffirmed its status as a Labour stronghold with George Lawlor topping the poll with over 20 per cent of the vote. He was later joined by Labour colleague Maura Bell, but former councillor Joe Ryan just missed out on the final seat to complete a clean sweep.

Joining Mr Lawlor being elected on count one was John Hegarty (FG), who this time out had transferred from the Gorey district to Wexford LEA. Independent candidate and former Social Democrat candidate in the last general election, Leonard Kelly, surprised even himself when he took the third seat in Wexford before All-Ireland winner for Wexford in 1996 Garry Laffan (FF), veteran Davy Hynes (IND) and Tom Forde (SF) were all elected on count nine.

New Ross was the last district to be completed and while independent Pat Barden topped the poll comfortably, it was a clean sweep for Fianna Fáil seeing Michael Sheehan, Michael Whelan and John Fleming make it over the line. They were joined by Brídín Murphy (FG) and Anthony Connick (IND) with veteran Fine Gael councillor Willie Fitzharris missing out.

Overall in Wexford, Fianna Fáil can be said to have been the real winners, taking 29 per cent of the vote, closely followed by the independents who made up 27 per cent and Fine Gael with 26 per cent. Sinn Féin will not be happy with their campaign, retaining just two seats. Meanwhile it was a mixed bag for Labour. Although they gained a seat in Wexford, they lost a party stalwart in Robbie Ireton in Gorey.