EMA says it will complete Pfizer review by end of December at the latest, with Moderna a week later 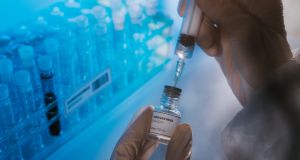 Covid-19 vaccine manufacturers have applied for emergency use in Europe.

Moderna and Pfizer-BioNTech are both in line for January launches of their Covid-19 vaccines in Europe after they applied for emergency EU approval on Tuesday.

The applications to the European Medicines Agency (EMA) came a day after Moderna sought emergency use for its shot in the United States and more than a week after Pfizer and BioNTech did the same.

US drugmaker Pfizer and its German development partner BioNTech said their vaccine could be launched in the European Union as early as this month.

“We can start to deliver within a few hours (of an approval),” said Sierk Poetting, head of operations and finance at BioNTech. “We have been stocking up. And everything that is there can really be distributed within a few hours.”

The EMA clouded the timeline, however, when it said it would complete its review for that vaccine by December 29th at the latest, and for Moderna’s shot by January 12th. It added its schedule may be subject to change as its evaluation proceeds.

The European Commission, the EU executive body, said it would likely give its final authorisation for a vaccine’s rollout days after a recommendation by the EMA.

An effective immunisation campaign is seen as the main weapon against the pandemic, which has claimed more than 1.4 million lives and ravaged economies across the globe. Close to 50 potential vaccines are being tested on volunteers worldwide.

Both vaccines are based on new messenger RNA (mRNA) technology, validating a once-unorthodox view among biotech experts that the human body can act as its own vaccine factory.

Any clearance in the EU and United States for the vaccines will be “conditional” or for “emergency use”, meaning developers are obliged to continue trials and provide more trial results as they emerge.

The European filings complete so-called rolling reviews, initiated by the EMA on October 6th in the case of Pfizer and on November 16th for Moderna, aimed at speeding up the process by doing a real-time assessment of the data as it lands.

The EMA said on Tuesday it had started a rolling review of Johnson & Johnson’s vaccine candidate after preliminary results showed it triggered production of antibodies and immune cells against the virus. – Reuters