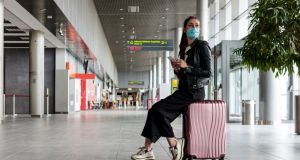 The CSO found that Irish people with family living abroad were more likely to believe passengers entering Ireland should have no restrictions on their movements. Photograph: iStock

More than half of people in the State (53 per cent) do not believe travellers arriving from red regions under the EU’s traffic light system should be allowed enter the country, according to new research published on Tuesday .

At present, all of Europe is classified as a red Covid zone aside from Finland, Iceland, parts of Norway and Denmark. Ireland, which currently has one of the lowest 14-day incidence rates in Europe, was also recently classified as orange.

More than one in six of the respondents to the CSO survey said people coming from red regions should restrict their movement for 14 days. This is despite the introduction of a new system which allows visitors from red regions to move freely if a Covid-19 test taken five days after arrival is negative.

The CSO found that Irish people with family living abroad were more likely to believe passengers entering Ireland should have no restrictions on their movements while those without families overseas tended to support a ban on visitors from red zones.

Respondents aged over 70 were more likely to agree that people arriving from red zones should not be allowed into the country although half of 18-34 year olds also agreed with this statement.

Expectations about when people will next be able to travel abroad also depended on whether respondents had loved ones overseas. Some 63 per cent of those with an immediate family member abroad said they expected to take an international flight before the end of 2021 compared with the 43 per cent who plan to travel before the end of next year but do not have immediate family abroad.

More than half of all survey respondents said they planned to fly internationally before the end of 2021 with 36 per cent saying their next flight would be ‘sometime in 2022’ and 6.8 per cent expecting it would be ‘2023 or later’.

More than 62 per cent of men surveyed said they expect to fly before the end of 2021 compared to 45 per cent of women.

The research was carried out between November 12th-18th through an online questionnaire among 1,585 people, before the Government announced the lifting of certain restrictions for Christmas.