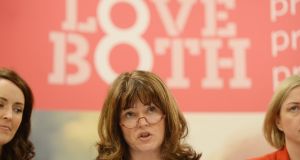 Pro-Life Campaign spokeswoman Caroline Simons says the result of the referendum on repealing the Eighth Amendment does not mean the Government is obliged to legislate for unrestricted abortion in the first 12 weeks of pregnancy. Photograph: Alan Betson/The Irish Times

The Pro-Life Campaign has said that it will lobby politicians to submit amendments to the forthcoming abortion legislation, including changes which would seek to specifically outlaw disability and gender as grounds for abortion.

At a press conference in Dublin today, spokeswoman Caroline Simons said the changes to the proposed law “should be accepted by fair-minded people who were operating on both sides of the referendum”.

A statement issued by Ms Simons on behalf of the LoveBoth group, a campaign run by the Pro-Life Campaign during the recent referendum, also said that it did not believe that there was “any obligation on the Government to legislate for unrestricted abortion in the first 12 weeks of pregnancy.”

Ms Simons rejected suggestions that the 12 weeks proposal had been endorsed by the people in the referendum vote.

“The only thing that people did was they have voted to remove from the constitution the constitutional protection of the right to life of the unborn baby and they have given the Oireachtas power to legislate to terminate pregnancies,” she said.

“You must recognise that one in three people voted against the referendum,” Ms Simons said. “And of the people who voted for the repeal of the Eighth Amendment numbers of them did so with mixed emotions. And many of them did so looking to address only the hard cases.”

The campaign issued a list of eight principles it said should be adopted by the Government.

They included: “where there is a risk that an unborn baby may experience pain in any capacity or degree, pain relief should be administered to the baby prior to the abortion procedure;”

“There should be no prenatal discrimination against unborn babies, for example, on the basis of sex or disability.”

“Healthcare professionals and facilities carrying out abortions should ensure that following abortion, disposal of the foetal remains should be undertaken in a manner which respects the dignity of the unborn baby. Sale of foetal remains or any part thereof should be strictly prohibited.”

It also says there should be provision for conscientious objection on the part of medical professionals.

The group said it would work in the long term for a reinstatement of Ireland’s constitutional ban on abortion.

Prof William Binchy said that he believed it would be possible to gain majority support for such a proposal.

“I don’t think you could do it tomorrow . . . but I do think that the inherent justice and humanity of not terminating the lives of innocent human beings is so self-evidently right that any human being of goodwill think thinks it through, thinks it through dispassionately over a period of time will realise that abortion is not the solution,” Prof Binchy said.