Government likely to respond quickly to plea for more judges 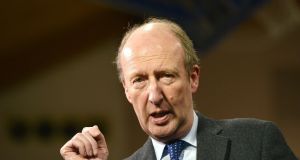 Minister for Justice Charlie Flanagan is likely to propose appointments of new judges to the Court of Appeal in the coming weeks, following a highly unusual public plea by the court’s president.

Any new appointments raise the prospect of conflict between Mr Flanagan and the Minister for Transport Shane Ross, who has blocked judicial appointments in the past.

Mr Ross declined to say yesterday when asked if he would assent to new appointments.

Last week, the court’s new president, Mr Justice George Bermingham, said he was faced with “an immediate crisis” in the capacity of the court to hear appeals because of the retirement of two judges this year, who had not been replaced, and the imminent departure of three more.

He was forced to cancel appeals scheduled to take place this week, he said, and warned that the cancellation of hearings would continue if new judges were not appointed soon.

Mr Ross has championed the Judicial Appointments Bill, which sets up an independent body to vet candidates and propose their appointment to the Government. The Bill passed through the Dáil last week, and now goes to the Seanad.

However, the Government lost votes on a number of amendments to the Bill, and it is now expected to seek amendments overturning these in the Seanad. When that happens, it will have to return to the Dáil for final approval. One TD closely involved in the process said there was little prospect of the Bill passing through the Oireachtas by the summer, as Mr Ross had previously required.

Neither Mr Ross nor his spokeswoman would say last night if he would support any new appointments to the Court of Appeal in the coming weeks.

The issue has frequently been a source of tension in Government, with Mr Flanagan insisting it is his responsibility to provide the courts with sufficient judges.

Mr Ross has been highly critical of the system of judicial appointments in the past, saying that politicians have appointed their “cronies” to the bench. He wants to limit political influence on judicial appointments, and also wants to limit judicial influence in the process. His frequent criticisms have caused anger among judges, and have worried many in Fine Gael, though the Government has pressed on with the legislation – albeit without any great enthusiasm – as the price for maintaining Mr Ross’s support for the Government.

But Mr Justice Bermingham’s blunt warnings last week have left the Government with little option but to act swiftly and appoint more judges to the Court of Appeal. It is highly unusual for a judge to make such a public plea; usually, the wishes of judges in such matters are made known privately through the Attorney General.

The Court of Appeal, set up four years ago, continues to battle with a legacy of hundreds of appeals inherited from the Supreme Court. It has dealt with 850 such appeals to date but 550 remain outstanding while the court’s own separate caseload also continues to increase.

The former Court of Appeal president Mr Justice Sean Ryan retired last March, while Mr Justice Paul Gilligan retired earlier this month. Mr Justice Alan Mahon will depart shortly to take up the post of Defence Forces Ombudsman and Mr Justice John Hedigan is to retire within a few months. Mr Justice Gerard Hogan has been nominated to the European Court of Justice.