Taoiseach moves to reassure people in NI over impact of Brexit 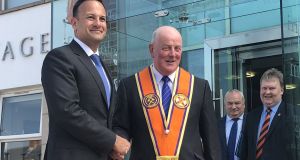 Taoiseach Leo Varadkar insisted he came to Northern Ireland and met the Grand Master of the Grand Orange Lodge of Ireland Edward Stevenson “with no hidden agenda”. Photograph: Twitter

Taoiseach Leo Varadkar has moved to reassure people in Northern Ireland concerned by the impact of Brexit.

At a number of events in Northern Ireland on Friday Mr Varadkar said he was aware of deep worry that the absence of the Stormont Executive over the last 16 months had left the province voiceless in the ongoing negotiations.

But he said he wanted to let people know “we are listening”.

Mr Varadkar said the Government and other member states would now closely examine the British government’s latest paper on the backstop option of closely aligned regulation. He said the paper was a welcome step forward but still fell short of providing guarantees against a hard border.

He also predicted new negotiations to restore devolution in the North may be unlikely until October at the earliest.

In his sixth visit to the province as Taoiseach, he said there was a lack of trust between the two main parties, the DUP and Sinn Féin, compounded by the impact of the complexities of Brexit which had injected a “whole new uncertainty”.

But if a way forward on the UK exit from the EU could be found by October an “opportunity may then exist.”

The Taoiseach spent equal amounts of time with representatives of the two main communities during his Friday visit, launching the annual west Belfast féile at an event in St Mary’s College on the Falls Road - after a morning meeting with senior leaders of the Orange Order at their headquarters in the east of the city.

It was the first visit of a sitting Taoiseach to the Orange Heritage Museum, Schomberg House with Mr Varadkar admitting he had travelled through a town in Canada last year named after Schomberg without realising the significance.

.@bbcgmu grilled the taoiseach @campaignforleo on tricky subjects like an Irish border poll, abortion and the Brexit backstop... but guess which question he just couldn't answer, in case he put his foot in it? 🧦🤐 pic.twitter.com/Sm8IKHdFbP

But speaking to reporters, he emphasised he had come as a “neighbour not an invader”.

As if to demonstrate his bona fides, Mr Varadkar began his day with a private visit to Baroness Paisley, the widow of the late former First Minister and DUP leader who struck up an unlikely rapport in late life with Martin McGuinness and Bertie Ahern.

Mr Varadkar spoke of his hope that “new relationships can be forged and old difficulties overcome” between the Orange Order and nationalists in Northern Ireland.

“We should all be very proud of what makes us what we are,” he told Orange leaders inside the building.

During a private tour of the museum, accompanied by Orange leaders north and south, Mr Varadkar insisted he came “with no hidden agenda”.

There were no protests outside the building, which was the former headquarters of Castlereagh Council when its leader was the then DUP leader Peter Robinson, and applause from local residents as the Taoiseach both arrived - 40 minutes late - and left, more than an hour later.

One local man, John Sloane, had come to watch “an historic event”, he said.

“Can you imagine this happening with Jack Lynch or Charlie Haughey coming here, or even Bertie Ahern and that wasn’t that long ago? It just would not have happened,” he added.

East Belfast DUP MP Gavin Robinson, whose party has regularly lambasted Mr Varadkar and accused him of interfering in Northern Ireland affairs, stressed the importance of the occasion.

“It is important not least because it is the first time the leaders of the lodges from the south have had the opportunity to meet the Taoiseach in the headquarters or the organisation, which of course is an all-Ireland organisation.”

There were moments of humour, too, as when Orange Grand Chaplain the Rev Ian McClean, a retired Presbyterian clergyman, told Mr Varadkar he had “escaped” from this week’s General Assembly just down the road in Belfast to attend the visit.

Mr Varadkar quipped: “I hope you are not missing any important votes.”

The grand master of the Grand Orange Lodge of Ireland Edward Stevenson welcomed the visit as a “significant moment” with the recognition of the long-standing cultural identity of the Orange family in the south.

The Taoiseach’s proposal to further develop an educational exchange scheme involving school pupils from the Republic visiting the Orange museum was also welcomed by Mr Stevenson, who said: “It can only lead to a better understanding, by all those who live on the island of Ireland, of the cultural heritage and traditions of Orangeism; its history; and its continuing relevance in modern society.

To mark the visit, Mr Varadkar was presented with a Galway Crystal replica of the Boyne Obelisk - a monument which formerly stood at the site of the Battle of the Boyne in Co Meath, until it was destroyed in 1923.

The Taoiseach rounded off his trip to Belfast by stopping for a pint of beer in Maverick gay bar in the city centre. Barman James Magennis said: “It was great to see him and it’s great to have a Taoiseach representing the LGBT community”.

1 Coronavirus: NPHET meets amid growing coronavirus cases in Kildare, Laois and Offaly
2 Officials refuse to rule out ‘Midlands lockdown’ following Covid-19 surge
3 Reopening of schools in many EU countries has not led to Covid-19 increase, ECDC report finds
4 Masks Q&A: Who has to wear them in shops and what happens if you don’t?
5 Second Midlands GAA club shuts down activity after outbreak among players
Real news has value SUBSCRIBE