The Irish border is to be the primary issue for Europe in the Brexit negotiations according to European Council president Donald Tusk has said. 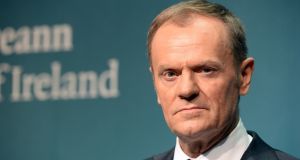 Issues relating to Ireland must be dealt with first in Brexit negotiations in advance of all other matters, European Council president Donald Tusk has said.

Mr Tusk was speaking at a press conference in Government Buildings following a meeting with Taoiseach Leo Varadkar.

He said there is an impression among some on the UK side that other issues on the future relationship between Britain and the EU could be dealt with in advance of talks on Irish issues, such as avoiding a hard border.

“My response would be Ireland first,” Mr Tusk said. He also said if the UK wants to avoid a hard border between Northern Ireland and the Republic, it must come up with firm proposals on how to do so.

“As long as the UK doesn’t present such a solution, it is very difficult to imagine substantive progress in Brexit negotiations. If in London someone assumes that the negotiations will deal with other issues first, before moving to the Irish issue, my response would be: Ireland first.”

He said that all EU members are showing solidarity with Ireland during the Brexit process.

“In times of trouble, families come together and stand with each other. For the EU27, this is especially true when we talk about Brexit.”

He also delivered a firm rejection of a statement from UK chancellor of the exchequer Philip Hammond, who on Thursday suggested a free trade deal between the EU and Britain could encompass financial services, even if the UK remains outside the European single market and customs union.

Mr Tusk said a free trade agreement can cover trade in goods, but this would not apply to services.

A deal on services, he said, would not be about tariffs but would instead focus on common rules, supervision and enforcement.

It means that in terms of financial services “life will be different after Brexit”.

He also reiterated there can be no backsliding from the UK on the commitments given on Ireland last December, including the “backstop” option of aligning Northern Ireland with the customs union and single market to avoid a hard Border.

He said it would have been impossible to allow the talks to advance to the next stage without last December’s agreement.

“We also have to be clear that any backsliding on the commitments made so far would create a risk to further progress in Brexit negotiations,” he said. “This applies also to the question of avoiding a hard border.”

Mrs May reacted negatively to the draft document from the European Commission last week that would give legal effect to the political agreement reached between the UK and EU last December.

“When I was in London last week, I heard very critical comments by Prime Minister May, and others, about the way the Irish border issue was presented in the draft Withdrawal Agreement,” Mr Tusk said.

The UK rejects a border down the Irish sea while also rejecting future British membership of the single market and customs union. This means the UK must “propose a specific and realistic solution to avoid a hard border”.

Mr Varadkar said Ireland wants a “deep, comprehensive and ambitious” future deal between Britain and the EU while “ensuring a level playing field”.

He repeated that the backstop on Northern Ireland will apply if no other option avoids a hard border. The Taoiseach also said future evolutions of the UK negotiating positions would allow the EU to “evolve its position” as well.

Mr Varadkar said the proposed post Brexit agreement outlined by the European Council this week, which pitches for free trade in goods in all sectors with zero tariffs, is based on the positions outlined by Mrs May to date.

“I welcome Donald’s assurance that the EU will enter the negotiations with an open, positive and constructive mind that will allow for the possible evolution of the UK position in the future.

“I have always said that my preference is to avoid a hard border through the wider future relationship agreement with the UK, Great Britain and Northern Ireland.

“We are committed to playing our part in exploring this option, or alternative specific solutions, in a way that respects the structure of the negotiations, and that will of course require further detailed proposals to be put forward by the United Kingdom government.

“However, we must have certainty that, if a better option proves unachievable, the backstop of maintaining full alignment in Northern Ireland will apply, in order to protect North South co-operation and avoid a hard border.”