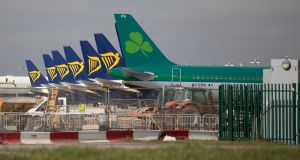 A third of people coming into the country are not answering the phone to officials checking if they are self-isolating.

The Oireachtas Covid-19 committee heard on Tuesday Department of Justice officials have a 66 per cent success rate when contacting new arrivals to make sure they are isolating at the address they gave when entering the country.

Since last month new arrival must fill out a passenger locator form detailing where they will spend the 14-day isolation period. The forms are mandatory but the isolation period is not. Department of Health officials said they are examining making isolation mandatory.

Department of Health Secretary General Jim Breslin said there are “complex issues of international and domestic law” surrounding mandatory isolation periods. “The EU position and that of other Member States is also evolving.”

The committee heard about 1,400 calls are being made every week to passengers who arrived through Dublin airport, of which two thirds are “successful”.

These calls may be to a mobile phone or a landline. Two checkup calls are made to new arrivals, one on the second day after their arrival and one on the twelfth day.

“If it’s to a mobile phone how do you know where somebody is when you phone? Do you just ask them?” committee chair and independent TD Michael McNamara asked.

The vast majority of people say they are at the location they put on the passenger locator form. If they are not it’s a matter for the Garda and Border Management officials, TDs were told.

The committee also heard the Department of Foreign Affairs has assisted more than 6,000 Irish people in returning home from 129 countries during the Covid-19 pandemic.

Committee members were told that “some 1,000 citizens dispersed across many countries, some in remote locations” want to get back to Ireland.

There are also a large number of Irish citizens, many of them elderly, who wish to come home from the Canary Islands to health checks, Secretary General of the Department of Foreign Affairs, Niall Burgess said.

He said the department has helped well over 6,000 citizens to return home, with assistance including the chartering of planes, “bringing back 132 of our citizens from Peru, 68 from India and 95 from Nigeria”.

Mr Breslin told the committee that the danger of infection has not passed and people engaging in non-essential travel are taking a risk of spreading the virus.

Mr Breslin told the committee which is investigating the State’s response to the coronavirus pandemic, that “it is important that where travel needs to take place it does not pose significant risk to the wider public”.

Mr Burgess said almost 1,400 updates to departmental travel advice were made in the first four months of 2020 alone, a 10-fold increase on the same period last year.

He said the Department of Foreign Affairs was working with the 1,000 people seeking to return home “to provide advice and help them with access to essential local services. The potential future challenges which our citizens’ face will depend to a large extent on the evolution of the pandemic over the coming months”.

Chief executive of the National Transport Authority Anne Graham told the committee that the pandemic had had a “profound and going impact” on the demand for public transport which is now typically at between 10 per cent and 20 per cent of what it was prior to mid-March.

Weekly demand in early March was approximately 5.6 million passengers but this plummeted to 500,000, or less than 9 per cent of normal levels. There has been some recovery with passenger numbers increasing to about 700,000 in mid-May before the easing of restrictions.

Social distancing requirements have dramatically reduced the passenger-carrying capacity to 20 per cent for buses and a larger reduction for rail which is currently easily achieved with the reduced demand.

But she warned that “we need to plan for a doubling of walking and a trebling of cycling journeys at peak time”.

As pressure grows to ease restrictions on travel Mr Breslin acknowledged the questions raised about the “stepped nature” of the easing of restrictions.

He said however that this was to allow public health officials to monitor the spread of the virus when the restrictions are modified.

Infections plummeted when the full restrictions were in place and as they are relaxed “we can expect the number of contacts to increase again, but hopefully in a way that continues to see the spread of infection controlled.

“Everyone is anxious to have the benefit of allowing some return to the normal functioning of society, which has its own public health benefits, as long as this is done carefully. “

Passenger numbers are currently around 1 per cent of their usual volumes. Airlines are restoring their flight itineraries and encouraging people to book trips while “other countries in the EU, many of whom had bans on non-essential travel, are re-opening and allowing their citizens to travel”.

In a submission to the committee on travel restrictions, Mr Breslin said those restrictions applied and being reviewed based on the advice of the World Health Organisation, which, he said, predicted that the “most plausible future scenario in the dynamic of Covid-19 may involve recurring epidemic waves interspersed with periods of low-level transmission”.