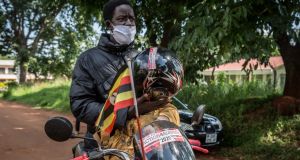 A Ugandan activist is riding a motorbike across the country to deliver sunscreen to people with albinism, while calling for them to be recognised as a vulnerable group during the pandemic.

Pat Robert Larubi has already driven more than 400km on what he is calling a “rescue mission”. Along the way he has given out hundreds of donated bottles of factor 50+ suncream, three to each person in need. “People were locked up in their houses,” he said, speaking during a stop in Gulu, northern Uganda. “They were giving up.”

There are roughly 5,000 people with albinism in Uganda, a condition where someone is born with little or no melanin in their skin. Along with facing stigma, they are particularly vulnerable to sunlight, which is difficult in a country like Uganda, where temperatures are high.

Mr Larubi says a nationwide transport ban aimed at stopping the spread of Covid-19, which came into force in March, has stopped people with albinism getting the suncream they need.

Many are struggling to work or get food, and also cannot afford it, said Mr Larubi, who is hoping that his mission raises awareness of the need to make special provision for them.

In one northern Ugandan district he found two boys working on a farm to help their mother out of necessity, earning just 4,000 Ugandan shillings (€1) a day. “Their skin was burnt, one already had a lot of wounds on him. The chances one person can rot away with cancer is very high.”

Jonathan, who is affected by the condition, said he experiences regular abuse and has been called “roasted pig” on the street. “You feel like not even coming out of the house because of what people say about you.”

While they face discrimination in Uganda, people with albinism are particularly badly treated in neighbouring Tanzania and Malawi, where there is a belief that their body parts can have magical powers if cut off and used in witchcraft. In Tanzania, some people think those affected are ghosts.