For the last 66 days many men have had, perhaps for the first time, a real chance to reconcile work and family life 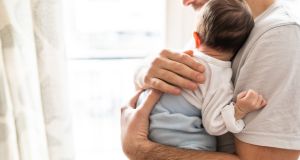 Could the growing understanding of how men benefit from fatherhood be the real lockdown dividend? Photograph: iStock

The great Maeve Binchy, who is currently enjoying a well-deserved revival as a role model for Irish women fiction writers, had one intriguing technique as a journalist. The eavesdrop: she listened in on people’s conversations. An exchange I witnessed recently reminded me of the parabolic power of her simple habit of listening.

The queue in the bank was long with men and women trying to get money business done on their lunch break. A solitary cashier struggled with a customer who had questions and a great deal of paperwork. As the queue threatened to reach the street, a woman spoke up; might it not be simpler for the information desk to deal with that customer, so that others might get their cash.

There is nothing more political right now than childcare: it is the matrix for lockdown lifting. Without it nothing much can happen

“Yay,” came an enthusiastic cry, “let’s hear it for the women”. And with that a rallying murmur began. Until the quiet female voice asserted itself again: “I didn’t realise the queue for the cashier was a gender issue.”

She killed the moment. But she had a point. Men were standing there too and were just as uncomfortable. There is a certain kind of populism, what you might call a fuzzy, warm feeling feminism, which sees sisterhood in everything. Which might be all very fine, if it didn’t exclude the other half of the suffering queue.

Mary Lou McDonald is adept at working the warm feeling sisterhood. Remember how she wooed the life-hardened traders of Moore Street in her election walkabouts. So when she clearly states, as she did in Dáil Éireann on May 21st, that the burden of childcare falls on women, everybody rolls with it – ironically, a hierarchy of victims (lockdown victims).

Even Sarah McInerney, who talks softly but carries a big stick, didn’t manage to deconstruct the issue in two interviews with McDonald on childcare. But then, childcare and questions on why McDonald recently justified the IRA’s 30-year violence campaign are not easily reconcilable topics. Perhaps McDonald was hoping that nobody would challenge her with her childcare in her arms.

There is nothing more political right now than childcare: it is the matrix for lockdown lifting. Without it nothing much can happen. It’s always been a running sore, but the failure to provide childcare to healthcare workers during the crisis has given McDonald fodder and she has run with it. Except that this time her natural talent – normally as probing as a heat-seeking missile – for spotting the unvoiced has failed her. Because on the question of childcare, men are the unvoiced.

There is no doubt the lockdown will be viewed by sociologists of the future as a great social experiment: whole families hermetically sealed for months on end. It’s only as it ends that we begin to comprehend the fallout. And the tragedy of increased domestic violence is the only subject we’ve talked about thus far.

Last weekend’s newspaper feature sections attempted to start other conversations. Depending on the social categorisation of the newspaper, features ranged from which celeb did what in the lockdown, to the existential questions of who suffered the most, to the nub – will anything really change post-coronavirus?

Many think small children are the big losers. Timidity, fear of contact with adults, is the natural result of the virus paranoia, which has been inculcated in them; they haven’t met their friends for months. Certainly, as Bertie Ahern said of his grandchildren on the Brendan O’Connor show, they have been denied all the little rites of passage in school.

But are small children such losers? For 66 days now, men and women have, in the main, been working from home. This has meant that fathers have been more accessible to their children.

The sunrise – yes sunrise – beach gatherings of young people (behavioural scientists can disabuse themselves of the idea that teenagers are the big losers) are heavily interspersed with parents pushing buggies – especially fathers.

More and more companies offer their employees the option of working from home. The burning question among couples is which one will choose to stay home

This, of course, is merely anecdotal. But for some time now serious sociologists have been studying the question of contemporary fatherhood, finding that men who have closer relationships with their children report greater marital satisfaction and better health. “They feel less stress, less stress to be successful, powerful and competitive.”

An important paper by Jemimah Bailey of Trinity College Dublin examines the structural barriers for men who want more involvement with their children, challenges the notion of the “patriarchal dividend” which simply means that men have it all – agency, power, influence – and suggests instead that when it comes to fatherhood, men can be in a position of disadvantage.

Lockdown may have changed that.

At last, it’s lifting. More and more companies offer their employees the option of working from home. The burning question among couples is which one will choose to stay home. I’m betting that person is not necessarily the mother. The notion that the marketplace defines your worth is harder to shift for women than men.

Among the many things psychologists debate is how long it takes to change a behaviour pattern. Sixty-six days seems to be a mean average. For the last 66 days many men have had, perhaps for the first time, a real chance to reconcile work and family life.

Could the growing understanding of how men benefit from fatherhood be the real lockdown dividend?

Childcare is a big topic in government formation talks. Fianna Fáil policy of increasing the home carer tax credit could prove an incentive to men to stay at home.

Wouldn’t you – pace Maeve Binchy – just love to be a fly on the wall at those talks?

Share your story: Are you living alone during the Covid-19 crisis?

4 ‘I’m thinking of leaving him, as soon as I can get beyond the 5km limit’