Lost Leads: After a woman and child’s bodies were found, one man sought help - the other kept working 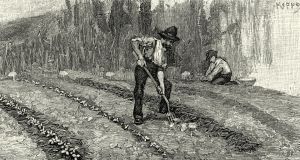 Two men made a shocking discovery while working in a field in Limerick in 1878. Illustration: iStock/file

On a winter morning in Singland, near Limerick city, two labourers made a horrible discovery while turning manure belonging to their employer, Mr Deegan. One of the men reeled and quickly sent for the police. But the other was calm, and returned to his work.

The bodies of Johanna Hogan - a servant who had recently come out of the Limerick workhouse - and her infant daughter Rosanna were uncovered as Martin McMahon and Thomas Cunneen worked at a dungpile in late January 1878.

It was McMahon who uncovered the mother and child while manoeuvring the mounds with a large, blunted fork. In relaying the ordeal, he emphasised the coolness shown by his colleague.

“I found the body of a child in the manure. I called to Cunneen. ‘What’s this?’ He said he didn’t know,” recalled McMahon, according to a news report in The Irish Times. “I went and told our employer . . . and also informed the police. When I got back (Cunneen) was still at work at the dungheap . . . (he) did not seem at all concerned by the discovery.”

Cunneen’s nerve came in handy when Drs Parker and Carey arrived to the scene. In what the doctor labelled a “most scandalous” display, the first examination of Johanna’s body took place in the field, in full view of gathering crowds. At this point, the remains had not been identified.

“There were about 500 people there when Dr Carey and myself made the examination, and they were only kept off us by the police,” said Dr Parker, adding that Cunneen himself had “assisted in the examination of the bodies, and (the doctor) thought him a very useful man.” Other reports noted that Cunneen had even helped load the infant’s remains onto a car.

The bodies were unrecognisable owing to advanced decomposition, according to the report to the constabulary office that year. But skull fractures and broken fingers on Johanna’s hand pointed to foul play. The inquest verdict was that murder - by persons unknown - had taken place.

Cunneen’s cool only became suspicious when police learned that a woman he had “taken up” with, along with the child he had fathered while she was in the workhouse, had been missing since mid-November.

In his mid-30s, Cunneen was a widower with a number of children. He had not come to the attention of the authorities much, save for a stint of penal servitude he had recently completed for fraudulently procuring a sack of flour on February 3rd, 1877, according to official records.

Two women who lived with Johanna and Rosanna came forward and identified the remains. Cunneen was quickly arrested and brought to the William Street barrack, where he denied all knowledge of the incident. In his pockets, however, police found four pawn tickets.

“They were issued from various pawn offices in the city,” reads another Irish Times report, “and set forth various articles of dress which were identified as belonging to the deceased.”

Cunneen was charged with murder and sent forward for trial at the summer assizes. In the reporting that followed, a picture of Cunneen’s relationship with Johanna emerged.

“He married early in life,” read one Irish Times report. “His wife died, leaving him several children over whom he might have exercised a parental care important to them and creditable to himself, but he did not.”

Cunneen was raised “on the estate of a most respectable family in the county of Limerick” and was deemed “a quiet, decent boy”.

When his wife died, he began seeing Ms Hogan, fathering one child in December 1876. “They lived a precarious life - sometimes together - sometimes apart. So their lives ran until at last she sought workhouse refuge with her progeny.”

Cunneen promised marriage several times, and in November 1877, he coaxed Johanna out of the workhouse. On November 12th, he arrived to her lodgings and again promised to marry her. She accompanied him out of the house, bringing along Rosanna, and the two were never seen alive again.

Earlier in the month Johanna went missing, Cunneen had allegedly arrived to her lodgings and taken away a box belonging to her, one witness said. When she then came looking for it, he played dumb.

The prisoner denied the charges and his lawyers leaned heavily on the fact that no specific time for the murder had been established. At Cunneen’s first trial in the summer, the jury disagreed and he was sent forward for the winter assizes in Cork.

At his second trial in December, the defence counsels emphasised the circumstantial nature of the evidence when summing up for the prisoner, according to an Irish Times report on December 14th, 1878.

It was shown that on the day Johanna went missing, Cunneen left his lodgings for just two hours and “it would have been impossible for him to kill the deceased persons, bury their bodies and afterwards present himself without any marks of blood.” If money was the supposed motive, the defence asked, why would he kill a woman who was recently in the workhouse?

Despite the efforts of Messrs Bourke and Barrington for the defence, the jury this time reached a guilty verdict against Cunneen, “who bore the announcement with an almost unmoved demeanour.”

When asked if he had anything to say as to why he should avoid the death penalty, he said in a clear, firm voice: “I am not guilty, my Lord. I am as free of guilt as you are.”

Cunneen was sentenced to death and, for the first time, broke down. Warders and policemen helped him out of the courtroom.

Snow began to fall in Limerick on the morning of January 10th, 1879, from what an Irish Times report said was “a cast iron sky”. The morning of Thomas Cunneen’s execution had arrived, just shy of a year after the grim discovery in Singland.

The reporter remarked on the “audacity” of Cunneen and his cold behaviour after the bodies were found.

“His conduct on the occasion elicited the remark that there was a combination of fiend and devil in him, unparalleled in the annals of Irish crime.”

At about 8am, the ceremony began. “It was a solemn, an impressive scene, which those who saw it can never forget,” wrote the reporter, who described Cunneen’s repeated kissing of a religious emblem in the moments before he ascended the platform.

When asked if he had any last words, he replied: “No, I have not.”

“Then, at the tolling of the passing bell for the departing soul, the word was given, the cord was unloosed and the spirit of a great criminal passed from earth to eternity, to the Throne of Mercy which, denied on earth, is always to be found at its highest source.”