Murder in Kilkenny: When a man ate his mother’s face

Lost Leads: A farmer makes a grim discovery after calling to a neighbour’s house 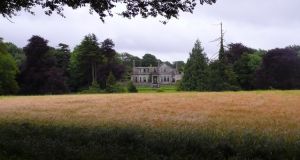 For some time, Edmund Hart had not been himself.

It was 9pm when concerned neighbour Michael Finn stood at the half-door of the hut at Ballyknock, Co Kilkenny, where Edmund lived with his mother, Mary. His calls for the elderly woman went unanswered.

Not long before the farmer’s visit on Thursday, July 10th, 1890, Edmund had lived with his wife, Margaret Grace, on a few acres of land over the Nore in Russellstown. Reports say he worked day and night on the plot, which was owned by his wife’s mother, even supplementing its upkeep using his own earnings from fishing the river.

That arrangement abruptly ended when his mother-in-law sold her stake to the landlord, John Howlett, justice of the peace and owner of the prominent Russellstown House. An employee of Howlett approached Edmund while he was working on the land and ordered him to vacate. That was the first he heard of the sale.

“This seemed to prey heavily on his mind, and for some time past it was stated by the peasantry that he was not all right,” reads an Irish Times report on July 12th that year.

“However, no steps were taken to put him under restraint, although it was stated he was heard to say that he would either kill his mother-in-law or the landlord who had deprived him of the land on which he had spent his money and his labour.”

As Edmund’s behaviour deteriorated, his wife left him. In turn, he was forced to live with his mother on the opposite bank of the Nore.

Finn, looking into the kitchen of the hut, called Mary’s name three times. Finn had already been at the house that day; he visited the previous night after hearing Edmund had been acting strange and stayed there with a boy named Sullivan until about 2am. A doctor had also been to see Edmund on Wednesday, when he gave him the all-clear.

“On getting no answer I thought she was out and was turning around to go away when I heard a noise in the room. I called again and Edmund Hart spoke and said his mother was dead,” recalled Finn, according to the report.

“The door was closed going in from the kitchen to the bedroom and there was something like a bundle of clothes against it. I entered, pushed the door open, and saw Hart.”

Finn found Edmund lying over his mother’s body. Mary was naked and motionless on the floor, which according to multiple newspaper reports was covered with blood.

“At the moment I saw him he had a large piece of flesh in his mouth,” said Finn. “I made a grip at him and dashed him against the ground. He struggled like a maniac, and with fire in his eyes he attempted to rush at me. I swung him out of the house and out on the road.”

Hart struggled free and attempted to jump into the river, but Finn caught hold of him. Twisting his arms, he marched him to a neighbour’s house and sent for the police.

On the evening of Friday, 11th July, an inquiry was opened by the coroner, Dr J B Hackett, and an inquest held. The brutality and “fiendish cruelty” of the crime and particularly the bloodiness of the scene would lead the incident to be branded the “horrible” murder in Co Kilkenny in headlines.

“The condition of the body as it was seen with Drs Walsh and Meehan this evening, lying on a small bed in a dingy room, was something horrible,” reads the inquest report. “The floor of the room was covered with blood, and several pieces of women’s clothing which were around were covered with blood. When the body was found, it is apparent that Hart either stripped his mother after killing her or she was in bed when he began his butchery. Both of the thighs were frightfully cut. A three-cornered brick was found, and it was covered with blood and hair, and a shovel was found in the room on which there was also found blood and hair.”

The official summary from the constabulary office noted that the body was disembowelled, the thighs cut and “the face disfigured and partly eaten away by the accused”.

After Edmund’s arrest, he was taken to the bridewell at New Ross, where he remained silent until the evening, when the bridewell keeper Mr Fretton noticed a change in his manner.

Later that night, Edmund became violent and four policemen and a guard were called in to restrain him. According to another Irish Times report, he was later placed in solitary confinement in a dark cell, apparently for his own safety.

“This seemed for a while to frighten him, but he again became wild and during the night the neighbourhood was awakened by his unearthly yells, while a strong guard of policemen was stationed outside his cell door,” reads the report.

Edmund had been due to appear before a court that Monday, but instead had a visit from Dr Meehan, who declared him to be insane. The court date was pushed forward until the following Monday, when Edmund, apparently in a more collected state, appeared before a judge at Rosbercon. He arrived to Wexford from Kilkenny Jail by car and under strong police escort.

The first witness examined was Dr Michael Walsh, of New Ross, who had been called to the hut the day before Edmund killed Mary.

“I met the prisoner at the door of his dwelling house and asked him for his mother. He said she had just had a weakness,” said the doctor, according to a Munster Express report.

“I asked his mother how she was and she replied that she was then all right. I spoke to the prisoner for about half an hour, and he seemed calm and collected. I said to him that I had heard that he was complaining of his head. His mother said he was now all right and that she wasn’t afraid. She seemed anxious to have him left at home and not to have anything done with him (the prisoner), who was then quiet, and I did not consider him dangerous to himself or anyone else.”

The court heard that when the arresting officer, Sgt Morrissey, had first cautioned him, Edmund had replied: “I’ve killed my mother, and I wouldn’t wish it for a million of money, and I was alright a few minutes before that.”

When the case was closed for the Crown, the prisoner was asked if he had a statement to make. “I did not know whether. . . ” began Edmund, standing up. He didn’t finish the sentence.

No further evidence was heard, and Edmund was sent forward for trial, before being returned to Kilkenny under the same heavy escort.

The case came to an end that winter at the Leinster assizes. Its conclusion is noted in the brief summary sent to the constabulary office that year: “Edmund Hart was brought up for trial at Wicklow Winter Assizes, 1890, and ordered to be confined in a Lunatic Asylum during her Majesty’s pleasure.”