Baby seagull that could not fly rescued from Primark fire smoke 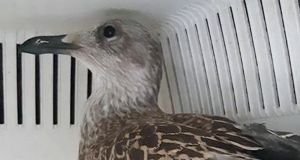 Handout photo of Smokey the baby seagull, who has been rescued from poisonous smoke created by the Primark store fire. Photograph: Debbie Nelson/PA Wire

A baby seagull who could not fly has been rescued from poisonous smoke created by the Primark store fire.

He was on the balcony of a nearby Ann Summers store in Belfast city centre when the blaze broke out. The bird had been abandoned by his family a couple of weeks ago and has been christened Smokey by his rescuers.

Staff at Ann Summers had been keeping an eye on him. A representative from Debbie Doolittle’s Wildlife picked him up.

“As most may have seen on the news by now that the Primark building is in flames. Just opposite the rescue site.

“I raced out onto the balcony to get it as he was fully exposed to the smoke and as he can’t fly would have sadly choked to death as he had no shelter.

“Thankfully we got him safe before being asked to evacuate the building.

Debbie Nelson, of Debbie Doolittle’s Wildlife, told PA the bird appeared to have injured itself falling from the roof and would have choked to death from smoke if left exposed.

She said: “The rescue was planned for today. It wasn’t until I got there I realised the fire was occurring.

“So we got in and out as quick and safely as we could before fire service closed off the entire area.

“The balcony was wrapped in smoke by the time we got up to it and was choking so was lucky we got him off there as he was completely exposed.”– PA