‘Revolver rule’: A post-Treaty warning about a ‘gang of motor thieves’

Lost Leads, 1922: ‘In order to find a parallel to the exploits of the bandits who infest the country, we must go back to the records of the notorious Kelly gang’ 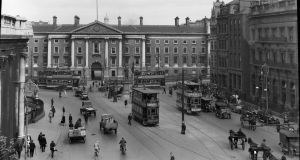 As a military despatch rider approached the barracks in Portobello, four young men converged on the motorcyclist and covered him with revolvers. They ordered him off the bike.

An assailant mounted the motorbike, but couldn’t quite get it working. “One of them tried to ride off with the machine, but could not manage it. The soldier was called back and questioned as to why the machine would not move,” reported The Irish Times the following day, on January 19th, 1922.

“(The soldier) rectified the mechanism under the cover of a revolver and one of the men then rode off on the machine. The other three men walked away quietly.” A number of people, soldiers included, witnessed the affair, but none approached the gang.

On the same day, across town, two privates of the 5th Brigade, Royal Garrison Artillery, were sent to deliver a box of film to Pathé Frères at number 2, Abbey Street Lower. While one went to complete the errand, the other was left to mind the Ford; within a couple of minutes, two men had stolen it, at gunpoint.

A few minutes’ walk away, on Gardiner Row, the third carjacking of the afternoon took place, in broad daylight. Again, a group of men – three in number – targeted a stalled military car. With the same efficiency as shown in the first two cases, the men surprised the driver as he stood beside the parked vehicle, quickly relieved him of the machine and drove away.

The evening before, a Sunbeam car belonging to Brigadier-General Cameron was taken from the military barracks at Tipperary. There was no force involved in this one; a man simply entered the garage and drove it away. “It’s alright,” he’d said as he passed through the gate, “I’m going to the hutments.” They didn’t realise it was stolen until 8am the next morning.

In the period following the approval by the Second Dáil of the Anglo-Irish Treaty, armed crime saw a spike. Automobile theft, in particular, was highlighted by both the police forces and The Irish Times in the first few weeks post-Treaty.

“The campaign of lawlessness has increased in intensity during the last week,” reported The Irish Times on the 19th. “In order to find a parallel to the exploits of the bandits who infest the country, we must go back to the records of the notorious Kelly gang that terrorised and pillaged the settlers in Australia in the ‘sixties.”

Between the 12th and the 18th, the following car thefts were reported:

Some insurers attempted to paint thefts, where a claim was made, as political. Dotted throughout the paper’s pages during the early months of 1922 are a number of cases involving companies refusing to pay out for stolen automobiles and other damage. The firms contended the thefts fell under riot or were otherwise connected to political unrest; clauses which let them off the hook.

On the 16th, following the first few incidents, the Dublin Metropolitan Police issued an official warning to motorists: “A gang of motor thieves is operating,” the warning, published in The Irish Times, read.

Vehicle owners were advised to remove a vital engine component – or otherwise technically disable the machine – to ensure they couldn’t be stolen. This perhaps explains the inability of the Portobello bandits to make off with the motorbike.

In reporting the trend, The Irish Times declared a state of “Revolver rule” and “Lawlessness” on the streets. “Owners of motor-cars in Dublin are passing through a very anxious period,” the paper said in one news summary that week.

“The city is infested with reckless thieves who, apparently, are armed to the teeth and automobiles are being stolen every day . . . Ireland is just beginning her career as a self-governing nation and the most drastic steps should be taken to lay these gangs of ‘motor bandits’ by the heels. While they are at large nothing will be safe; for the men who will steal motor-cars will steal anything.”

It’s notable that targets were military or police vehicles. In the eyes of The Irish Times, the distinction mattered little: “Before the truce, the theft of a military vehicle was regarded as a purely political offence but now there is no excuse. Whether a motor-car belongs to a British general or an Irish shopkeeper, its theft is a crime against the Provisional Government, and, consequently, a crime against Ireland.”

Further automobile thefts and attempted thefts in Dublin were reported beyond the paper’s warning on January 19th. In one case, on Saturday 21st, a chauffeur named Richard Taylor was ordered out of his taxi at Rochestown Avenue by two armed men he had previously picked up.

The robbed man asked the men for a receipt, and got one: “He begged for a receipt,” reads an Irish Times report, “and was given a paper, on which was written: ‘Commandeered by the IRA Moon Riders’.”

In another case on the same day in Tullamore, a more savvy soldier, described in The Irish Times as “plucky”, purposefully drove his car into a wall and destroyed it after an attempted carjacking by a group of armed men.

Stories of murder, ambushes, robberies and other serious crime in towns at the Border and in Belfast – as well as in Dublin and elsewhere – became regular features on the newspaper’s pages s the weeks and months went on.

One short update on March 2nd indicates that at least some portion of the ongoing spike in robberies was being addressed: “Several arrests have been made by the Irish Republican Police in Dublin in connection with recent motor car and cycle robberies,” reads the report, adding that no fewer than 101 criminal cases were then awaiting trial.

Several stolen cars had been recovered, the report says, adding that the “delinquents” involved in the various crimes were expected to be brought to justice speedily: “Some of the thieves are, it is stated, well-known ‘crooks’, and others are beginners at the ‘game’,” the report says.