Death of a president: How ‘The Irish Times’ covered JFK’s assassination 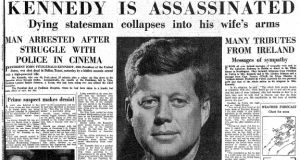 “President John Fitzgerald Kennedy, 35th President of the United States, was shot dead in Dallas, Texas, by a hidden assassin armed with a high-powered rifle” - So begins the lead story on the front page of The Irish Times on November 23rd, 1963, one day after the president was shot dead as he travelled in a presidential motorcade.

A portrait of the president sits prominently in the centre of the page, underneath the headline and subhead: “KENNEDY IS ASSASSINATED - Dying statesman collapses into his wife’s arms.”

On the left-hand-side of the page, a smirking Lee Harvey Oswald “holds up his manacled hands” following his arrest in connection with the shooting. The 24-year-old assassin would himself be the subject of the lead story two days later.

The remainder of the front page is devoted to coverage the killing, particularly Irish tributes, save for two ads; one for Odearest mattresses and another for Martell Cognac. A brief weather report features, too - cloudy, with outbreaks of rain.

“From all over Ireland messages of sympathy were sent to the American Embassy in Dublin,” begins the offlead to the right of the late president’s face. Much of coverage in the coming days touched on the “Irish angle” and the impression the president had made on his visit to the Republic five months beforehand.

President Éamon de Valera issued his condolences by telegram: “The whole Irish people mourn in sympathy with you. Their hearts go out to you and we pray that the soul of your husband, who had become so dear to us here, may now be with God in Heaven and that the Holy Spirit may give you His conciliation in this hour of terrible sorrow for you.”

The Irish president had appeared on Telefís Éireann the night before: “You will all have heard of the tragic death of President Kennedy,” he said, according to the report. “I am here simply to give public expression to our common sorrow. We sympathise with all the people of the United States but, in particular, with his grief-stricken wife and the other members of his family.”

In the next part of his address, Mr de Valera mentioned the visit, which was commemorated again on page 6 with a collection of photographs taken by Irish Times photographers at the time.

The news of the assassination reached the people of Dublin before the story hit the papers on the 23rd. “It was as if news had come of the sudden death of a son or a father,” wrote former Irish Times diplomatic correspondent Wesley Boyd on page 8. “At first no one wanted to believe that it was true, but as the radio and television bulletins came in, hope gave way to sorrow. Laughter died and gossip ceased.”

The country, Boyd wrote, stopped to mourn: “The news travelled fast, as sad news will. In the streets of Dublin people crowded round the windows of television shops to watch in respectful silence the special programmes. On buses and on trains, in pubs, in dance halls and restaurants the news was received in shocked amazement.”

Elsewhere, political reporters speculated about a crisis within US politics: “President Kennedy’s death will undoubtedly transform the political scene in the United States,” reads a piece on page 7.

“There was no doubt that he would have been the Democratic Party candidate in next November’s election. He would also have been a strong favourite to win again although he lost ground recently over his administration’s civil rights fund.”

The Irish Times view on the deceased president was one of praise: “His youth and vitality promised great things for the United States; he brought a freshness of mind to bear on the gulf which separates one part of the world from the other,” reads an editorial on the day following the assassination. Like Abraham Lincoln, Kennedy was cut down “mid-flight”, it said.

“Whatever form of hatred lay behind the assassin’s gun, it is to be hoped that the only lesson to be learned from his death will be that only more of good, more love by man for all his fellow beings such as this great man showed will help to ease the pain. . . He was courageous in war, he was courageous in sickness and defeat and he was courageous in breaking barriers of religion and race.”

On Monday, November 25th, Lee Oswald again appeared on the front page of The Irish Times, the morning after pictures of his own fatal shooting were shown around the world.

The lead story on the front page begins: “The captains and kings of the earth and the representatives of Communist dictators today began to arrive in this brilliant, sunlit city for the funeral tomorrow of Mr John Fitzgerald Kennedy, the 35th President of the United States of America.

“They assembled as the astonishing news was flashed on television screens that Lee Harvey Oswald, charged with the assassination of Mr Kennedy, had been shot in the basement of the Dallas police headquarters. Harvey was about to be transferred to the County Jail - an armoured car was waiting outside - when the shot was fired.”

On page 4 of the same edition, underneath a photograph of a horse-drawn carriage containing Mr Kennedy’s remains, a report from the US reads: “People lined the route 10 and 12 deep as the body was slowly driven in solemn procession through the sun-swept streets from the White House to Capitol Hill, the seat of the US Congress, to receive the final homage of a grieving nation.”