Murder in Charleville: The killing of Bridget Gayer

In 1909, a young woman went missing in Co Cork while shopping with her sister. Her body was found eight days later 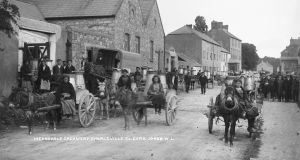 Annie fed the donkey while she waited for her younger sister. Bridget had left her at the north end of main street, outside Lynch’s shop, to walk back into town to buy a brush; an add-on errand at the end of their trip to Charleville for new boots.

Ten minutes passed. Annie became anxious. She decided it was time they began the journey back to Feenagh, over the border in Co Limerick. Bridget, about a fortnight shy of her 19th birthday, had said she would go to Galway’s shop for the brush. That’s where Annie started.

The story the elder sister was told at Galway’s was the same one she heard minutes later at the hardware and then the drapery; Bridget had not been in. At about 4pm on July 12th, 1909, Annie left, hoping her sister had gone ahead with neighbours. Arriving home 3 hours later, she discovered this not to be the case.

The girls’ mother, Kate, set out for Charleville herself that evening, according to a report in The Irish Times, leaving Annie in the house. She had three other sisters besides Bridget, and two brothers. William Scanlan, husband to another sister, Ellen, returned at about 9pm that evening, having spent the day at the opening day of the Cahirmee horse fair.

Faced with the news, William didn’t seem too worried, offering: “She must be gone to America or some place.” That evening, the police were alerted.

Eight days after Bridget’s disappearance, in a field on the road to Charleville station, two men discovered a woman’s body in a ditch.

“It was found by accident in the field by the roadside,” reads another report in The Irish Times, “covered with grass . . . and partly decomposed.” The branches of a poplar tree, plucked from over a nearby fence, further obscured the remains.

John Donoghue, one of the two men who found the body, said he became “weak at the spectacle, and reported what he had discovered to the police.”

A sergeant named Purcell was the first police officer on the scene: “The position of the clothes suggested that the body had been dragged some distance face downwards. From what he knew, [the sergeant] came to the conclusion that this was the body of the missing girl, Bridget Gayer. ”

A postmortem revealed five revolver “punctures”, all fired into Bridget’s back, though only some of the pellets remained; “three bullets were found in all in the body, and a bullet that pierced the apex of the heart caused instant death.”

Sgt Purcell immediately set out for Feenagh - he already had a suspect. Questioning during the week had already revealed that William Scanlan’s account of his own movements on the day of Bridget’s disappearance did not add up.

Scanlan, about 40 years old at the time of his arrest following the discovery of Bridget’s body, had gone to Charleville on the morning of the 13th to conduct his own door-to-door searches, repeating “again and again” his theory that she must have gone to the United States, perhaps “with some young fellow who was able to keep her.”

About twenty years before the killing of Bridget Gayer, Scanlan emigrated to America, where he joined the US army, later fighting in the Spanish-American war. He was discharged and returned to Ireland after about 10 years. In 1907, he approached Kate Gayer and asked for her daughter’s hand in marriage.

Bridget, not Ellen, had been his first choice.

Kate refused. Seventeen, she thought, was too young to be married. “We laughed at it,” she later recalled, “and we had no more about it.” However, an offer from an army veteran on a £30 pension wasn’t to be sniffed at and Ellen, who was living in England at the time, was called home to take up the match.

On his arrest, Scanlan made a number of short statements: “If I am guilty, I am ready for the rope”; “I am done for. Many a better man got the rope”; and (to his wife) “Ellie, if anyone can prove that I was seen walking with Bridget that day I am willing to take the rope”.

As it happened, proving Scanlan had been Charleville, and with Bridget, was not particularly difficult. Over a number of court dates, seven witnesses swore they saw him on the road beside the field where Bridget’s body was found. Others described a girl - hand in hand with Scanlan - wearing the exact attire Bridget was killed in.

One man, Michael McCarthy, deposed to actually greeting Scanlan as he walked past his house. He received no reply.

However, the Crown still lacked a motive and a murder weapon.

The prosecution suggested Bridget was planning on going somewhere - possibly with Scanlan. Her attire was particularly nice that day, reports said, and she wore two sets of underclothes.

Judge Kenny, in his summary report, wrote that the Crown suggested an “intrigue” existed between Scanlan and Bridget, and “that she expected to have been taken away by him to Cork or elsewhere that morning. In confirmation of that it was proved that the girl had done that morning a thing she had never done before, namely put on a double set of underclothing, two chemises, two bodices, two petticoats.”

Furthermore, he night before she went missing, Bridget had been alone with Scanlan for some amount of time. The train to Cork departed Charleville each day at 12.34pm - shortly before the pair were seen on the road to the station. Witnesses recalled the time because the Angelus bells stood out.

One piece of evidence the judge found “curious”, but which failed to have any large impact - despite efforts by the defence - was note written on a piece of paper found in a book belonging to Bridget; addressed to a “W Mahony”, it was in Bridget’s handwriting, and mentioned her “American order”. Bridget’s family insisted she never talked about America and nobody could source any dealings with anyone named Mahony.

At Scanlan’s first trial, in December 1909, the jury disagreed, and he was put forward for trial again in the same assizes. Before the retrial, Michael McCarthy, a key witness, fell ill. The trial was delayed until spring; in the interim, McCarthy died.

The death of a second Crown witness - Mrs Motherway - and yet another jury disagreement meant Scanlan would only be found guilty, after three trials, in December 1910.

An Irish Times report tells us that “the prisoner, when asked if he had anything to say, remained as if stunned, and unable to speak.” He was sentenced to death.

Attempts were made to elicit mercy from the Lord Lieutenant. A doctor, James McCarthy, wrote a letter stating Scanlan was of unsound mind, while a petition written up by the prisoner’s solicitor was signed by local clergy, justices of the peace and county councillors.

The memorial asked for a reprieve based on the circumstantial nature of the evidence, the fact two juries had already disagreed and the mental “agony” already endured by the prisoner. Also, for good measure, it was suggested that an Irish execution had not yet taken place under the reign of King George V - the solicitor suggested that record should stay unblemished. (The last execution had been that of Joseph Heffernan in January that year, for the murder of Mary Walker in Mullingar.)

But it didn’t matter. On January 4th, 1911, William Scanlan was hanged in Cork by John Ellis. His death, according to official papers, was quick.

Bridget Gayer was laid to rest in the graveyard at Ballysally in the same plot as her father, Daniel Gayer.

When The Hangman Came to Galway, by Dean Ruxton, published by Gill Books (€16.99) is available now.