Man denies running restaurant from home despite sign over door 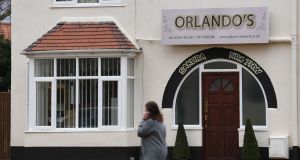 A man has denied running a Japanese restaurant from his home, despite neighbours’ complaints and a large illuminated sign hanging above his front door.

Norwich City Council said it is investigating the address on Earlham Road in Norwich, which features a large sign reading “Orlando’s” above the door, a phone number and a web address.

Orlando Williams, who lives at the address, previously ran a Japanese restaurant called Sakura Yakiniku in Norwich city centre and denies running a restaurant from the property.

When asked about the sign by the Eastern Daily Press newspaper, Mr Williams reportedly said: “All I do, I have my name on my house.”

“There is no restaurant there.”

On Thursday, the council approved an application for the property to be used as a bed and breakfast but such approval does not allow the business to serve alcohol or operate as a restaurant.

The Facebook page for Sakura Yakiniku announced the restaurant had re-opened at the Earlham Road address in October 2018 after “temporary” closure in 2015.

Local resident Andrew Unwin said: “When he first got this going he sent some invitations and leaflets to the neighbours.

“The city council said the problem they’ve got with enforcement is that until they see him using it they can’t do anything about it.”

A flyer shared on Facebook in October invites customers to “book a table for sushi” at Orlando’s on Earlham Road, along with the caption “open EVERYDAY from 16:00 to 22:00”.

On review site TripAdvisor, the restaurant’s page lists its old address in the city centre but images show the outside of Mr Williams’s home.

A Norwich City Council spokesman said: “We’re in the middle of two ongoing investigations into possible breaches of planning and food safety regulations, which may have legal consequences, so we can’t provide specific details which may form part of this investigation and which could jeopardise the case.” – PA