Accident or murder? When a ‘thief’ drowned in the Liffey on Christmas

When 22-year-old Thomas Garvey was reported for allegedly pickpocketing a sailor in 1883, police gave chase along the quays 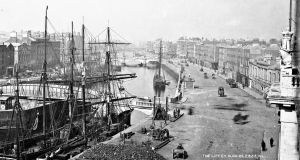 The ‘swivel bridge’ (Butt Bridge) in Dublin city, near the scene of the chase, circa 1885. Photograph: National Library of Ireland Flickr Commons

The Coroner was having a tough time keeping Ellen Garvey’s testimony on track.

At the opening of the inquest into Thomas Garvey’s death, he asked her to “only state what she saw” on the morning of December 25th, 1883 - the day of her son’s death.

“It was wilful murder, sir,” she replied.

“I must really have you removed if you speak in that fashion,” said the Coroner. “Give your answer to the question.”

“I tell you the God’s truth,” said Ms Garvey, according to an Irish Times report. “He left me in the morning and I was told that he was being took by the police. I ran out and saw him pursued by a policeman. He was in the rigging of the ship and asked the policeman (Sgt Sherlock) not to arrest him that day.

“Sherlock took him and Garvey asked to be allowed to go to the urinal. He was let, and ran out of the other door, and up to the rigging again. Sherlock said he would take him dead or alive and went up the rigging again.

At this point, she said another sergeant at the scene, David Hozack, “was standing by me, and if I had said another word, he would have...”

She was cut short. The Coroner insisted Ms Garvey state only what she saw. “He fell into the water,” she said, “and was helped by a man who rowed up in a small boat.”

She said her son remained in the water, and the police followed his coursealong the north wall.

Her son, she told the inquest, had been in England and hiding from the police. He worked as a labourer on the quays in Dublin at the time of his death; he was 22, unmarried and lived in the family home at number 13, Moss Street.

Garvey was no stranger to the constabulary. Prison registers indicate he had served time for assault and larceny in the previous two years. The crime he was apprehended for on the morning of his death allegedly occurred the night before.

Edward Lundy, the sailor who accused Garvey of stealing from him, addressed the inquest. On the night of Christmas Eve, he was approached by Garvey on the corner of Moss Street, near the quays. The young man asked the sailor to buy him a drink. Lundy obliged him.

“When they came out the deceased put his hand in witness’s pocket and took out £5 14s that was loose in the pocket,” reads the report detailing the accusation, which adds: “Witness was a little under the influence of drink.”

Lundy did not report the robbery straight away. Instead, he raised the alarm after seeing Garvey the next morning on the quays.

Sergeant Sherlock was patrolling on George’s Quay on Christmas morning when he heard the reports. He walked towards Moss Street and encountered Garvey crossing the river; when he told the young man to stop, he ran for the urinal, as his mother had said.

But he kept running, jumping on board the Alexandria, then onto another vessel, then back onto the quays as a group of constables, now including Hozack, gave chase. Sherlock said Garvey, well acquainted with the ships on the quays, climbed back up the rigging of one, shouted back: “I’ll drown myself rather than give you the satisfaction of pulling me.”

By this time, Lundy had been called from his lodgings and identified the fleeing man as the culprit. Garvey, not keen to be arrested, made another break for it: “(Thomas) then swung himself down by the rope and dropped into the water.”

The accounts, to this point, matched up. A man in a rowboat named McClure helped the young labourer onto his vessel and made his way to the shore, where he himself was arrested for his trouble. Garvey made away in the little boat, attaching it further down the quayside to another vessel, the St Patrick.

‘Sank in the mud’

Garvey took hold of a rope to climb back onto dry land. On seeing the police waiting on the north quay, he tried to climb back down, but his boat had moved. One way or another, he then wound up in the river and drowned.

How exactly he fell from the rope, however, was a matter of contention.

“Sergeant Hozack followed him down the rope,” recalled Joseph Donnelly, a coal dealer who saw the episode unfold. “He let go his hold and sank in the mud... Hozack was trying to save him.”

The Coroner echoed this point - that the sergeant was trying to prevent Garvey’s death, but his mother interrupted and said she did not feel satisfied with the evidence.

That’s when Mary Dardis, a sister of Thomas Garvey’s, “stated that she saw a sergeant shaking the rope to which her brother was clinging when he let it go. The sergeant dragged the rope from him and sunk him.”

A juror piped up at this, the second accusation of murder that morning: “This is a totally contradictory story.”

The Coroner objected to the evidence: “It is almost evident that this witness did not see the occurrence. She is evidently trying to prove too much.”

But another witness, James Clarke of Gill Street, gave a similar account. “The man slid down a rope, and (Clarke) heard him call to the police sergeant to haul him up. The sergeant had him about half way up when he gave the rope a jerk, and the deceased fell in and was drowned.”

Hozack, a 33-year-old 10-year veteran of the force according to police records, then gave evidence.

Most of the story as far as the drowning was the same, though his account would have Garvey dishing out more vitriolic taunts to the constabulary... “(Hozack) ordered deceased to stand, but he said he would ‘be damned before he would be taken by a bastardy policeman’.”

The sergeant said when Garvey realised he was in a spot of bother, he asked the policeman to pull him up. He managed to drag him about four feet before Garvey fell into the water. Hozack tried to throw him a rope, he said, but he could not get hold of it.

Hozack went into the water after Garvey and raised his body with a boathook.

The Coroner, faced with conflicting testimony, told the jury that unless they were certain that Hozack shook the rope, the death verdict had to be misadventure.

After a short discussion, the death was ruled “accidental” and furthermore, Hozack was “not to blame for his action in the matter, but deserved commendation for his endeavour to save deceased.”

Outside the morgue, the news was not welcomed by the mob of coal porters that had assembled, according to The Irish Times, with some “saying that the deceased had been ‘murdered’; and one observed that ‘some day one would pay for it and there would be another dead man’.”

“Then hoisting the coffin containing the remains of the dead upon the shoulders of four of their body, the remainder formed behind it and carried it to the residence of the deceased’s relatives.”