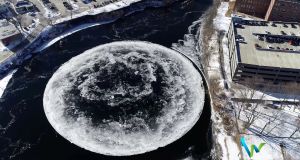 A massive ice disc formed on the surface of Presumpscot River is seen in Westbrook, Maine. Photograph: Tina Radel/via Reuters

A giant ice disk churning in a river that runs through the small US city of Westbrook, Maine, set off fevered speculation on Tuesday.

Was it an icy landing zone for aliens? A sign of impending doom? A carousel for ducks? (A handful were, in fact, enjoying the ride.)

The Boston Globe wrote that it was “like some type of arctic buzzsaw,” and residents hurried to the edges of the Presumpscot River to catch a glimpse. Scientists say that ice disks are an unusual, but entirely natural, phenomenon that occurs when a pile of slush freezes in an eddy or a piece of ice breaks off from a larger one and begins to rotate.

As it turns, hitting rocks and water, the sides are shaved down.

Steven Daly, an expert in river ice hydraulics at the Army Corps of Engineers’ Cold Regions Research and Engineering Laboratory in Hanover, New Hampshire, said his agency generally got just one or two reports of rotating ice disks in the United States each year. They are not usually this big, though.

Kenneth Libbrecht, a professor of physics at the California Institute of Technology in Pasadena, California, who has studied ice physics, said most ice disks he had seen were in the 20- to 30-foot (6m- 9m) range .

Local officials estimated that the Westbrook ice disk was about 300 feet (90m) in diameter.

“It might be a world-record size, if anybody were keeping track,” Mr Libbrecht said.

Tina Radel, the marketing and communications manager for the city, filmed a drone video after Rob Mitchell, a local business owner, alerted her to the remarkable sight on Monday.

After posting it, she spent Tuesday fielding calls from reporters around the country. “It’s been an overwhelming reaction,” she said. “People are loving it.”

In fact, The Portland Press Herald noted the ice disk had Westbrook buzzing “almost as much as when city police spotted a giant snake eating a beaver in roughly the same location in June 2016.”

Mr Mitchell, who owns an air-conditioning business and another property on the riverfront, said that he, too, had never seen anything like the ice disk in 25 years in Westbrook.

He added that its size was changing , while it was bigger in the morning, it had shrunk by Tuesday afternoon, when the sun was strong and temperatures hovered in the mid-30s (Farenheit, less than two degrees Celcius). The forecast called for lower temperatures and snow later in the week.

One constant: The ice disk kept moving, counterclockwise, at the pace of a brisk walk. “It’s perfectly regular and uniform,” Mr Mitchell said. “I don’t think you could engineer a machine to move it as smoothly.” –New York Times