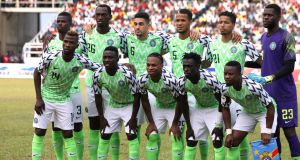 Nigeria may be about to play England in a friendly football match at Wembley but it is their eye-catching kit which has captured the public imagination, selling 3 million replica shirts on pre-order alone.

A large number of shoppers queued outside Nike’s flagship store on Oxford Street on Friday morning to get their hands on the top.

The kit sports a feathered pattern in homage to the Nigerian team which made its World Cup debut in 1994.

Finishing top of a group including Argentina and Bulgaria, “Naija”, as the team are known, bowed out in the round of 16 in heartbreaking fashion.

In Nigeria itself, the demand for the shirt before its release resulted in copycat kits appearing in Lagos markets last week.

“Right now in Nigeria, the jersey is one of the best and I am happy selling it,” one market trader in the capital told the BBC. “Nike has not officially started selling, that’s for sure.

“But its not a top-notch quality like the one you can get from the Nike shop. When you know the prices also you cannot compare with it.”

The country is hoping that the shirt, with its eagle wing-inspired black-and-white sleeve and green torso, will help propel them to victory in their third consecutive World Cup.

Arsenal’s Alex Iwobi and Leicester’s Wilfried Ndidi were among the players who modelled the kit, first unveiled in February, alongside the away shirt - a “cool, refined vision” of the classic full-green strip - for the promotional photos.

The makers said the away kit was a long-standing symbol of a nation that could boast of having “the world’s most expressive team”.

Nigeria will wear their new shirt on Saturday in their World Cup warm-up game against England, who are expected to clock up a comfortable victory. –Guardian

1 Ireland could lose out as France lays claim to most of €5bn Brexit compensation fund
2 Two men found dead in Dublin city centre
3 Metro South may be back on table as transport plans for Dublin are reviewed
4 Publican blames Covid-19 as Dublin’s Dice Bar to shut for good
5 Boy (4) left in hospital for over two years due to Tusla and HSE failings, report says
Real news has value SUBSCRIBE