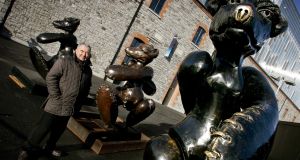 Harry Crosbie oversees the placement The Three Bears sculpture by artist Patrick O’Reilly at the Point in 2009. Photograph: David Sleator

The sculpture of three bears marching in front of the 3Arena could have marched its way to the Grand Canal dock recently except for fears the animals could lure children towards the water.

Businessman Harry Crosbie offered the Patrick O’Reilly sculpture to the city council on temporary loan before it goes on permanent display elsewhere.

But the Grand Canal Plaza Management Compnay, which manages and maintains the plaza, baulked at the proposal because “the siting of such a child-friendly sculpture at the end of the ‘red carpet’ would attract young children to the water’s edge, where currently there is no barrier protection, and would have obvious health & safety implications”.

Mr Crosbie initialy commissioned The Three Bears sculpture to brighten up what he felt was a particularly bleak part of Dublin.The sculpture was removed from the front of the 3Arena, formerly the Point Depot, in March last year by agents working for Grant Thornton at the behest of Nama and placed in a warehouse in an undisclosed location in the city.

The canal dock management company also said Waterways Ireland use the jetty to service boats and other water based activities using Grand Canal Dock and that locating the sculpture there may create adverse structural implications.

In addition, the management company said the ‘red carpet’ forms an integral component of Martha Schwartz’s design for the plaza which connects the Grand Canal Theatre to the open expanse of water in the dock. “The design did not envisage a sculpture or other feature to be located at the end of this ‘carpet’, hence the original design intent for the plaza should be respected and retained in its current form.”

Based on the management company’s concerns, the Dublin City Council Arts and Cultural Advisory Group recommended not to accept Mr Crosbie’s offer of the temporary loan of the artworks

Mr Crosbie was widely credited with transforming Dublin’s docklands from the late 1980s until the crash. He bought derelict land in the area for less than £1 million in 1989 after which his involvement included the building of the O2, which used to be The Point Depot, the Point Village, the Bord Gáis Energy Theatre and the Gibson Hotel.