Fireworks and rows: How Ireland reacted to royal weddings of old 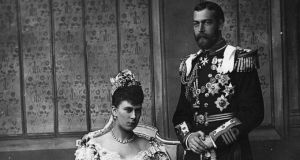 The marriage of George, Duke of York, and princess Mary of Teck. Photograph: Wikipedia commons

Long before Marks and Spencer set up shop, there was a major fireworks sale at number 19 Grafton Street. Royal weddings weren’t common and Mr Lawrence, of Lawrence and Son, wasn’t about to miss an opportunity.

“THE ROYAL WEDDING FIREWORKS,” shouted the headline of a short advertisement in The Irish Times, which promised “GRAND DISPLAYS OF FIREWORKS in any part of Ireland. ” Lawrence didn’t stop at geographic generosity. He could provide large consignments with “competent men to fire them”, or a smaller batch, with detailed instructions.

Irish newspapers don’t ignore royal weddings. That was as true last month as it was in the summer of 1893, when the industrious Mr Lawrence spotted his window to hawk a few extra bangers.

Following the engagement of prince George, Duke of York (later king George V), and princess Mary of Teck, the set pieces began to trickle onto the pages of The Irish Times. Many of them will be familiar to readers today.

Exhibit A: “Princess Mary’s wedding gown is exceedingly beautiful,” reads a report on July 7th, the day after the wedding. “The material used is a rich silver and white brocade, woven at Spitalfields, of exquisite texture. The design, thrown up in silver from the soft background, is a happy grouping of the shamrock, rose, and thistle, with silver ribbons entwined between each other.”

Irish figures with links to the ceremony were hoisted to the top of the news coverage; Lafayette, the famed Westmoreland Street photographer, had been “specially honoured by further Royal patronage, amply testifying to the high appreciation in which his fine artistic work is held by members of the Royal Family.”

Laudatory letters poured in, including one from an RIC officer requesting “every one of (his) comrades to subscribe a small sum each towards a wedding present”. Prime minister William Gladstone met the scrutiny of The Irish Times when he failed to announce a public holiday for the wedding; the move gave “deep and widespread offence to the English community”.

Elsewhere, an endless catalogue of lavish gifts earned column space, whether it was a consignment of special silk from Clones or a set of damask table linen from Lurgan.

The day itself drew enormous attention. It went off without a hitch amid “tropical” heat. Crowds lined the streets for hours before the ceremony, with 5,000 extra police on duty in London that day - the same surplus required for Harry and Meghan’s wedding.

An Irish Times reporter, in situ well ahead of the masses, was well-placed to record the jubilation.

“Dense throngs of people lined the route from early morning and as the day advanced house roofs and windows became occupied, and every coign of vantage from which to view the procession was eagerly seized by the ever-increasing crowd,” the reporter wrote, apparently as enamoured as the spectators.

“Carriages containing beautifully dressed ladies and gentlemen in uniform and court dress were continually passing on their way to St James’s Palace, and the various regimental bands discoursed sweet music at the various points along the route.”

The procession appeared just before noon, helmed by a coachman whose handsomeness made it into the copy.

“There were the six old fashioned cream-coloured Flemish horses, with gold trappings, led by grooms in the Royal livery, harnessed to the carriage; the fine old corpulent, handsome coachman overlooked with gold and scarlet livery, handling the ribbons with an impressive look upon his face as though everything depended upon him alone; and the cheers of the people were raised to a mightier volume as they saw their Sovereign and the mother of the bride, and both graciously bowed their acknowledgements of the reception accorded to them.”

The main report appeared on July 7th, on the same page as a series of updates on the progress of the Home Rule Bill. A harsh division line politically, and the very same one that had arisen within Dublin Corporation a month beforehand.

In the shadow of Ireland’s pursuit of self-rule, it was queried whether or not it was appropriate to officially issue congratulations to the royals at all. At the council’s monthly meeting on June 5th, the conflict came to a head.

Robert Sexton, a Conservative, took the following notice of motion: “That a loyal address of congratulation be adopted by this corporation to her Most Gracious Majesty the Queen and their Royal Highnesses the Prince and Princess of Wales on the marriage of his Royal Highness the Duke of York and the Princess Victoria Mary of Teck.”

The motion was seconded and passed and Sexton tabled a resolution to prepare an official address. It was met with staunch opposition from the Nationalists.

The Lord Mayor, in an attempt to cool the discussion, said the Council’s action should be “very gravely and carefully considered”.

“The claim of Ireland to self-government was no longer contemptuously dismissed,” he said, “for the Imperial Parliament was engaged nearly all its time in legislating for Ireland on Home Rule lines.”

According to an Irish Times report a day later, the Lord Mayor appealed to Home Rulers to consider what action was really best for the cause. To snub the Royal Family could serve to provide fresh ammunation to opposers of Home Rule, who “would endeavour to obtain from them that day at least apparent proof that, notwithstanding the great changes in the prospects of this country and the feelings and opinions of Englishmen, nothing could mitigate their hatred and enmity to the British connection and the Throne.”

After a fiery back-and-forth, following amendment was backed, 33 to 16: “That while the occasion of the marriage of HRH the Duke of York elicits sincere good wishes amongst the members of this Council and the citizens of Dublin, and while it is admitted that her Majesty’s present Government are endeavouring in some degree to atone for the evils of past generations, the time has not yet arrived when this council can present an address of congratulation to the Royal Family, but trust that so soon as the desire of the Irish people for a National Parliament has been acceded to the address of congratulation may be presented from all representative bodies of Irishmen.”

Unsurprisingly, that didn’t go down well with Irish Times readers. One letter writer, an anonymous figure within the corporation, “felt deeply grieved and saddened that the principal corporation in Ireland should have so far forgotten the courtesies and amenities due to our royal house, and said to be characteristic of Irish gentlemen, as to have acted in the churlish and unmannerly way they have done.”

After the wedding, The Irish Times published the Queen's address, for the benefit of “her loyal subjects”.

Victoria was grateful for the affection and attention paid to the ceremony. It was “nothing new” to her.

“She knows that the people of her vast Empire are aware how truly her heart beats for them in all their joys and sorrow, and that in the existence of this tie between them and herself lies the real strength of the Empire. With them the Queen joins in the warmest prayer and wishes for welfare and happiness to her dear grandchildren.”