‘Most interviewed’ royal expert proves to be Tommy from New York 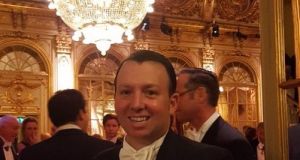 Thomas J Mace-Archer-Mills Esq, the plummy-voiced leader of the British Monarchist Federation, was a regular feature on TV channels during May’s royal wedding, dispensing wisdom on Prince Harry and Meghan Markle’s union while wearing a bow tie and tweed jacket.

In one interview for a Norwegian TV channel, he warned Markle that the most important aspect of the union was “keeping integrity, keeping formality and making sure that the traditions and heritage that we have as British people remain at the forefront”.

In another clip, recorded at a five-star hotel with a US broadcaster, he advised the future Duchess of Sussex not to upstage existing members of the royal family “especially when you’re coming in the way you are”. Shortly afterwards Mace-Archer-Mills approvingly tweeted an article describing himself as “the most interviewed man” on the subject of the royal wedding.

Unfortunately for the overseas news outlets who booked him in the belief they were getting an authentic upper-class Englishman, according to the Wall Street Journal, he is actually Thomas “Tommy” Muscatello, a 38-year-old Italian-American who grew up in upstate New York.

Mace-Archer-Mills, whose website lists countless media appearances and honours, told the newspaper he identifies more as being British than American and has been obsessed with the country from a young age; however, he declined to discuss his current nationality.

He said he had begun finishing conversations with friends by saying “God save the queen” and had adopted a British accent, despite living in Bolton Landing, a town close to the Vermont border.

He told the newspaper he adopted his current surname by combining “names of friends and distant relations” and he has an agreement with two, unrelated, elderly British individuals to call them his grandfather and grandmother.

Mace-Archer-Mills was also involved in organising an anti-Qatar conference in London at the end of 2017, which was attended by Iain Duncan Smith and described by activists as an “amateurish” attempt to garner support for a coup in the Middle Eastern country.

He is also editor of the biannual Crown & Country Magazine, this year launched “the world’s first royal themed cryptocurrency” and has previously published a book of cocktails entitled Their Majesties’ Mixers – when they reign, they pour.

His father, Thomas Muscatello snr, said of the teenage Tommy’s obsession: “He told me, ‘Dad, someday I want to move over there and be part of what’s going on’.”

He also describes himself as the president of the Centre for British Royal Studies, an organisation which has little online presence beyond his own biographies.

But he is best known for his punditry on the royals. In one clip, recorded outside Buckingham Palace, he offered advice to the future duchess.

“She is loud, she is American, she fights for her cause. We don’t do that here,” he said in a video recorded outside Buckingham Palace before the wedding. “We do things quietly with dignity.”

“Ms Markle is going to be a little bit challenged when it comes to that because she’s so used to doing things the American way, which is not the British way.” – Guardian