We speak to to three buskers on Grafton Street on the day when Dublin City Council have updated their street performance bye-laws. Video: Bryan O'Brien 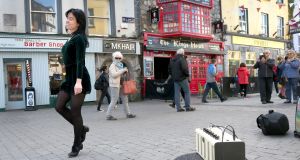 Connemara sean-nós dancer Emma O’Sullivan used to earn a living in Dublin until the threat of fines of between €75 and €1,500 drove her back west.

Now the street performer fears she will no longer be able to survive in Galway, due to new bylaws restricting daytime busking which were voted in earlier this week.

The controversial measures, which relied on the casting vote of Fine Gael Mayor Pearce Flanneryafter a split of nine councillors each way, will prohibit buskers from using amplification before 6pm in a designated city centre area.

“Circle acts” which require an audience to stop, watch or participate, will also be prohibited before 6pm.

The bylaws state that a street performer “shall not act, say, do or sing anything that is likely to cause alarm, distress or offence to any member of the public , any business owner or occupier, the council and/or any member of An Garda Síochána”.

Another section states that performers under the age of 16 must have a parent or legal guardian with them at all times.

In contrast to the busking bylaws introduced in Dublin in 2015 and amended in 2016, Galway is not yet introducing permits.

The ban on use of backing tracks in Dublin drove Ms O’Sullivan out of the capital, and now a ban on amplification before 6pm in Galway will make it impossible for her to perform in the streets, she says.

O’Sullivan says that she relies on a 17 watt amplifier that “fills my area and provides enough music for me to tap along. I perform for two hours in the morning and am never there after 6pm as there are people outside drinking at that time. And the noise level is far higher.”

The dancer says she has brought the amplifier to “many city council meetings to show the councillors how small it is and to explain how unrealistic it is for me to rely on live music.”

Fianna Fáil city Cllr Peter Keane said O’Sullivan is a “fabulous performer”, and it gave him “no joy” to be regulating busking in Galway.But he said city businesses and the busking community had failed to agree at a workshop held on May 2nd.

He said city businesses paid €35 million annually in rates and are concerned about loss of revenue due to noise problems.

Willliam Street newsagent Paul O’Brien said he has no problem with buskers, but the amplification is the problem. “Ed Sheeran busked close to us many times and he didn’t have an amplifier,” he said.

Galway Busking Community spokeswoman Niceol Blue noted that buskers had drawn up a voluntary code of practice and had offered to work with businesses on a compromise. The group represents 30 performers year round, rising to 60 during the summer.

Some 385 of 403 submissions to Galway City Council opposed the bylaws , she said.

The Galway Buskers Community agreed at Friday’s meeting to explore legal options and will host the first in a series of protest busk-ins on May 27th.

Cllr Keane said there would be a huge degree of discretion and a review period after six months. It is expected the legislation will not be enforced until later this summer.