Underpants not a good enough disguise as cash-van robber jailed 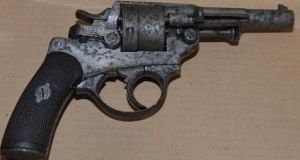 A revolver used by Jason Keogh, who disguised himself with a pair of underpants in an armed cash-in-transit robbery. File photograph: Metropolitan Police/PA Wire

A man who disguised himself by wrapping his head in underpants for an armed cash-in-transit robbery has been jailed.

Jason Keogh was captured on CCTV in an alleyway arranging the underpants on his head before holding up a G4S guard with a silver revolver and taking a cash box, the Metropolitan Police said.

The 44-year-old then returned to the same alleyway, where he ran into a parked van before fleeing the scene, near the Morrisons supermarket in Aldermans Hill, Palmers Green, north London.

He was unable to break into the cash box and it was recovered several hours later in the canal at New River Path on Oakthorpe Road, while the handgun and three rounds of live ammunition were found nearby.

Keogh, of Deans Drive, Enfield, north London, was sentenced at the Old Bailey on Tuesday to seven years and two months in jail after admitting robbery, possession of a firearm and possession of ammunition.

He was caught on November 29th last year after forensic work identified him as a suspect in the robbery which took place months earlier, on September 10th.

Det Insp Jason Barber, of the Met’s Flying Squad, said: “Despite the slightly comedic way Keogh disguised himself for this robbery, it shouldn’t detract from the fact this was a very serious offence that put people at real risk of harm. The sentence handed down reflects this serious nature.

“The Flying Squad will continue to robustly investigate all crimes of this nature and continue to protect the industry and public against such dangerous individuals.” – Press Association