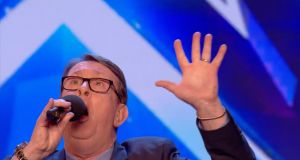 Fr Ray Kelly on Britain’s Got Talent on Saturday night

An Irish singing priest who wowed the judges of Britain’s Got Talent said he received a round of applause from parishioners at Mass on Sunday morning.

Father Ray Kelly (64), the parish priest at Oldcastle, Co Meath impressed the judging panel of Simon Cowell, David Walliams, Alesha Dixon and Amanda Holden with a rendition of REM’s Everybody Hurts which was broadcast on Saturday night.

Fr Kelly previously went viral after a video of him singing Leonard Cohen’s Hallelujah at a wedding in 2014 received over 60 million views on YouTube.

Speaking to The Irish Times on Sunday, Fr Kelly said “I’m just out of 11.30am Mass, people were in congratulating me, they gave me a big round of applause in the church this morning.”

The parish priest said he is due to appear on ITV’s This Morning Show with Philip Schofield and Holly Willoughby on Monday.

“I’ve always loved to sing and perform and I do it in church here all the time with Mass but I never thought it would reach this level,” he said.

Fr Kelly received a standing ovation from the crowd and all four judges, who have placed him into the next stage of the contest.

“I think your voice is beautiful, I loved the version of the song, this is everything we’ve been waiting for. I absolutely loved it,” he said.

Actor and author David Walliams said it was “a beautiful performance” while singer Alesha Dixon said “you just seem like the loveliest man, this is a beautiful audition”.

Fr Kelly said he was “blown away” by the judges’ comments.

“I didn’t know what to expect from the judges or anything, you know when you go out and do something like that.

“I was really blown away by Simon’s comments and David, Alesha and Amanda. They gave me the height of praise which was fantastic to get.”

Fr Kelly said he watches the talent show every year and the REM song is “a song near and dear to my heart”.

“I thought maybe I could be the first singing priest to win Britain’s Got Talent,” he told the judges.

Cowell joked with Fr Kelly prior to his performance asking him “do you do exorcisms” to which he replied “yeah we can work on David whenever you want, do you want me to zap him now or later?”