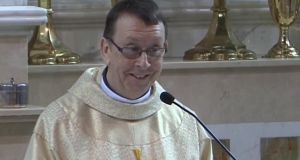 A Meath priest has become an overnight YouTube sensation after a video of him singing Leonard Cohen’s Hallelujah went viral.

Fr Ray Kelly’s surprise performance at the wedding of a couple in his parish of Old Castle has received more than 200,000 hits since being uploaded yesterday.

His Kelly’s personalised rendition of the song brought bride and groom Leah and Chris O’Kane to tears, and he has since been inundated with requests from soon to be wed couples.

“I knew somebody had taken a video, but I’ve been absolutely flabbergasted by the response, and there has been a fair demand for me to perform now it is online,” said Fr Kelly. “I’ve only been on YouTube once or twice in my life so it was a surprise to see the video and see how many views it has, I’ve been floored by the reaction.

“Locally, most people know I sing at weddings, but Leah and Chris aren’t from the parish. I told them at the rehearsal I would sing for them, but I think they were a bit taken aback.”

Fr Kelly is now trying to juggle his role as a priest and his new found celebrity. “I’ve made five or six radio appearances so far, and then had a funeral this morning. I’ve got no problem coping with the attention.”

The singing priest was part of The All Priests Show in Dublin, and performed in the States. “I love to sing, and I love the buzz of performing. I travelled to America and did shows there. I’ve never had to deal with anything like this before, but I’m coping.”

He is also planning on releasing a charity album to coincide with his 25th year since being ordained. “I’m currently working on a third album, and I’m hoping it will raise money for local charities. The first one was called Simply Me and the second More of Me . I’ve had suggestions the new one should be called No More of Me! ”