France sued for €351m in row over throne of Monaco 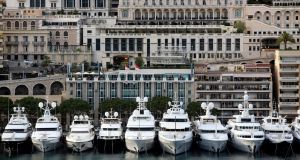 A French-born aristocrat is suing France for €351 million in damages, claiming it tricked his family out of inheriting the throne of Monaco.

Louis de Causans alleges that he and his relatives would have been in the line of succession if not for a “sleight of hand” by the French state more than a century ago.

De Causans says that by falsifying the rules of succession, France gained control over the Mediterranean principality, robbed his family of its birthright and installed another branch of the Grimaldis on the throne.

He insists his legal action is not aimed at Monaco’s current ruler, Prince Albert, but the French state.

The aristocrat, whose full name is Louis Jean Raymond Marie de Vincens de Causans, told Le Parisien newspaper: “I want the truth to come out and this injustice perpetrated by France on my family to be put right.

“In reality, my cousin Prince Albert acceded to the throne by a sleight of hand . . . France found a solution to get its hands on Monaco. Afterwards, they managed business on the Rock as they wished.”

The succession dispute dates to the reign of Louis II of Monaco, who had no heirs. De Causans says the throne should have passed to a second branch of the Grimaldi family, from which he descends.

At the time, this would have meant Monaco being ruled by Guillaume II de Wurtemberg-Urach, a German. For France, on the brink of the first World War, the prospect was unthinkable.

Under pressure from Paris, Louis II adopted Charlotte Louise, the daughter of his lover Marie-Juliette Louvet, a cabaret singer and Prince Albert’s great-grandmother. A law was passed in 1911 recognising this succession, but it was later deemed illegal. A second law was passed on the issue in 1918. France and Monaco also signed a treaty requiring prior French approval of all future Monégasque princes.

De Causans says this “bizarre” change of rules meant the Monaco throne passed to a child “who had no connection to the royal family” but was used to create a new branch of successors.

“I thought it was the Grimaldis’ fault, but then I found out it was the French state that caused this dramatic turnaround for us,” he said.

He added that France’s actions had prevented him from receiving any of the principality’s revenue, which he said was “not normal under the most strict dynastic rules”. – Guardian