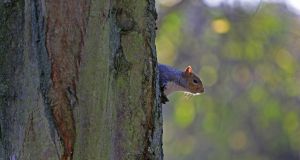 Squirrels can be ‘very persistent, not just running behind someone, but entirely fixated on them’. File photograph: Nick Bradshaw

German police have rescued a man after he called for help saying a baby squirrel would not leave him alone.

Emergency services received a call on Thursday from the man, who claimed he was being chased down the street by the tiny animal.

Police in the city of Karlsruhe said the unnamed man called them in desperation after he was unable to shake off the small rodent.

Officers sent a police patrol car out to investigate and arrived to find the chase still in full flow. But the drama ended suddenly when the squirrel, apparently exhausted by its exertions, lay down abruptly and fell asleep.

Officers took pity on the animal, which had probably become separated from its mother. Police said it probably targeted the man because it was in search of a new home.

“It often happens that squirrels which have lost their mothers look for a replacement and then focus their efforts on one person,” said the police spokeswoman Christina Krenz.

She said the animals could be “very persistent, not just running behind someone, but entirely fixated on them.

“It can be pretty scary. The man didn’t know what to do and so he called the police,” she added. “He was certainly feeling a bit threatened.”

But police on the scene appeared more amused than alarmed.

“A squirrel will be our new mascot, it will be christened Karl-Friedrich,” reads the police write-up. “The squirrel has fallen asleep in fright.”

“It was just a bit of fun,” said Krenz. “The officers thought up a name that would suit the baby squirrel.”

Officers took the sleeping Karl-Friedrich into police custody, and then to an animal rescue centre, where the rodent was said to be doing well.

Krenz said the rescue centre was looking after two other abandoned baby squirrels brought in on the same day for similar reasons, though theirs was the only case in which police had to intervene. – Guardian