Sainsburys CEO apologises for singing ‘We’re in the money’

The chief executive of UK supermarket chain Sainsbury’s Mike Coupe has been filmed singing 'We’re in the Money' before going on air for an ITV interview on the day he announced a merger with competitors Asda. Video: ITV 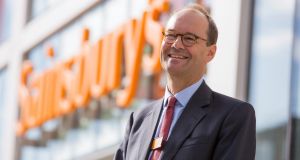 In the wake of the £12 billion deal between the two grocery giants, Mike Coupe was filmed by ITV News singing. Photographer: Jason Alden/Bloomberg

The CEO of Sainsbury’s has apologised after he was caught on camera singing We’re In The Money following the announcement of the British supermarket chain’s merger with former competitor Asda.

In the wake of the £12 billion deal between the two grocery giants, Mike Coupe was filmed by ITV News singing lines from the well-known musical theatre tune in between televised interviews.

Mr Coupe sang “We’re in the money/The sky is sunny/Let’s lend it, spend it/ Send it rolling along” and appeared to look down the lens of the camera at one point as he did so.

He said in a statement later that his singing took place during “an unguarded moment” as he tried to compose himself before a television interview.

“It was an unfortunate choice of song, from the musical 42nd Street which I saw last year, and I apologise if I have offended anyone,” Mr Coupe added.

Asked by Channel 4 News whether he will personally be “in the money” as a result of the merger and what is in it for him, he said: “I am a big shareholder in Sainsbury’s, my shareholding is a matter of public record, you can see how many shares I own.

“It is unfortunate I was caught singing, as I say I was relaxing at the time. This is an incredibly stressful day and maybe it was an unfortunate choice of song.” - PA