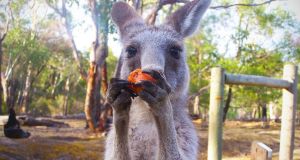 An Australian politician has called for a coordinated government response to a spate of junk food-crazed kangaroo attacks on tourists on the New South Wales central coast. Image: iStock.

An Australian politician has called for a coordinated government response to a spate of junk food-crazed kangaroo attacks on tourists on the New South Wales central coast.

The attacks have occurred while tourists attempt to feed the native animals inappropriate food such as carrots and corn chips, and even McDonald’s takeaway, tourist operators in the area say.

“There have been a number of reported incidents in which kangaroos have attacked visitors, in one case causing a very deep gash to a man’s stomach,” the local MP, Greg Piper, told NSW parliament.

“In most cases they have been kicking out, clawing faces and grappling with people, causing lacerations or significant scratching. Recently one attacked a man, who required 17 stitches in his face.”

Advised on travel websites and social media that the grounds of Morisset hospital near Lake Macquarie is a reliable place to see wild kangaroos for free, foreign and domestic tourists have been flocking to the location, which is about 4.5km from the nearest train station.

Mr Piper said last week he had visited the site, which is an operational psychiatric hospital, and had seen tourists offering the animals corn chips as well as apples, bananas and processed foods. Kangaroos’ usual diet is grasses.

Michelle Shaw, the nutritionist at Sydney’s Taronga zoo, said feeding the animals could be very harmful. Kangaroos were grazers, with digestive systems similar to cows, and feeding them even fruit or vegetables could cause stomach ulcers and inhibit the digestion of their proper diet, she said.

A local tour bus operator, Shane Lewis, estimates there are up to 2,000 visitors a week - the majority on weekends - seeking selfies with a roo. His company transports about a quarter of them, by his estimation. He said the animals had learned to associate the tourists with food.

“You can rustle a chip packet and they know what’s in there,” he said. “That makes them aggressive...The dangers are, you wouldn’t go near a dog when it’s eating its dinner, but people let their children go over, and I’ve seen kangaroos lash out thinking the kids going to take their food when they’re just coming to pat them.”

He said he had been showing tourists photos of injuries caused by the kangaroos to discourage them from feeding the animals.

“We try to scare them into not being naive and thinking they’re cute and cuddly by showing them the photos, what can happen, and not to give them any food,” he said.

Lewis said the presence of tourists was generally positive as it tended to make the animals safer but more education was needed. The site’s population of kangaroos have been subject to vehicle attacks and two bow and arrow attacks, according to the Newcastle Herald.

Piper said it was probably impossible to stop tourists coming to the area - “that joey has left the pouch, so to speak”, he said.

But he called on the state’s national parks department and health department, which owns the hospital site, to install appropriate signage in several languages to remind people that feeding the animals was illegal and unsafe. He also suggested tourism infrastructure such as toilets may be necessary. - Guardian

1:50 Everyone in Ireland to get Covid-19 vaccine by September, says Donnelly