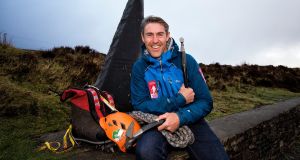 A plaque in McDonnell’s memory was placed at K2 base camp in Pakistan earlier this week by Donegal man Jason Black, who hopes to climb the 8,611m peak – with assistance from a piece of equipment given to him by McDonnell’s mother.

Black, a “global endurance athlete”, who has previously climbed Everest, is carrying a jumar, an ascender device used on a rope, which Gertie McDonnell gave to him when he visited her in Kilcornan, Co Limerick.

“Jason visited her before he made his first attempt on K2 two years ago,” Damien O’Brien, Ger McDonnell’s brother-in-law explained. “We knew he was taking it back this year, and he also showed us the plaque he hoped to place at base camp for Ger.”

McDonnell’s name is on the list of 77 fatalities on the K2 peak – there have only been 320 successful ascents. The Gilkey memorial was named after Art Gilkey, who died during the 1953 American Karokoram expedition.

However, O’Brien said the dedicated plaque would mark the fact that McDonnell was still remembered among Sherpa teams who work on the mountain. A group of 11 climbing Sherpas are supporting Black and his team of 13 international mountaineers, led by Garrett Madison.

McDonnell had accumulated six years of mountaineering in Alaska and had also climbed Everest with Corkman Mick Murphy in 2003 when he came to the assistance of fellow Everest summiteer Pat Falvey who was feeling unwell.

Mc Donnell helped two Koreans and a Sherpa on a descent from K2 in August 2008 shortly before he himself was struck by falling ice. His body was never recovered.

Black hopes to make his ascent on August 2nd, the 10th anniversary of McDonnell’s death, if weather permits. An Irish Red Cross ambassador, Black aims to raise awareness about the humanitarian work undertaken at home and abroad by the charity during his expedition.

During flooding in Donegal last August, he said he saw at first hand the efforts which Irish Red Cross volunteers went to in his home town. He also hopes to remember McDonnell and 10 other mountaineers who died on K2 in 2008.

He says the plaque is from “all of Ireland” to show its support for a “brave mountaineer who lost his life” while helping others.

A final anniversary cycle for McDonnell from Doolin, Co Clare, to Kilcornan takes place on July 21st. “We felt we should cap it at 10 years, and we have friends of Ger’s from Alaska and all over the world travelling here to take part,” O’Brien says.