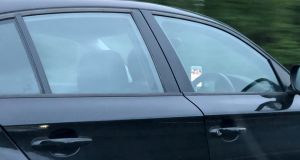 A driver has been fined after he was spotted watching his favourite television show on the motorway.

The Central Motorway Policing Group (CMPG), which is made up of officers from West Midlands Police and Staffordshire Police, tweeted a picture of the moment the man was caught on Monday.

The motorist had been travelling on the M6 towards Stafford when he was interrupted by police, who took a picture of him watching a programme on his mobile phone.

“We had to interrupt his viewing to issue him with a fine,” police said on Twitter.