Is this some kind of croak? Woman finds frog in head of lettuce

‘This type of incident, while incredibly rare, can naturally occur with fresh produce’ 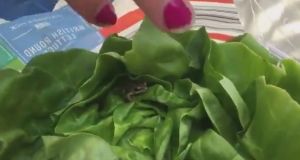 ‘What to do when you find a frog in your lettuce?’ Photograph: Shevaughan Tolputt/Twitter

A vegan woman has posted a video of a small frog she found lurking in a head of lettuce she bought in Aldi.

Shevaughan Tolputt (37), from Cornwall, tweeted the video on Saturday after discovering the amphibian in her “British Round Lettuce”, with the caption: “What to do when you find a frog in your lettuce?!?!? #YouGetExtraAtAldi.”

The supermarket chain replied to the video on Sunday morning, asking Ms Tolputt to direct message its official account with further details. Ms Tolputt confirmed she had bought the lettuce at an Aldi store in Redruth.

A spokesperson for Aldi told the BBC: “This type of incident, while incredibly rare, can naturally occur with fresh produce.”

What to do when you find a frog in your lettuce?!?!? #YouGetExtraAtAldi pic.twitter.com/EItm2V6NwM

The chain apologised and said it is investigating how the frog ended up in the lettuce. Ms Tolputt has been offered a 36p refund.

Ms Tolputt, a social marketing specialist who is “trying to be vegan”, according to her Twitter bio, told the BBC she was “ shocked, but I can also see the funny side of it”.

“I peeled off the outer layers of the lettuce and there it was,” she said.

“It is a vegetable so a frog appears to show they are growing them in a natural way,” she said, adding that she avoided eating the part of the lettuce in which she found the frog.

In replies to her first tweet, Ms Tolputt said she set the frog free in a nearby field.