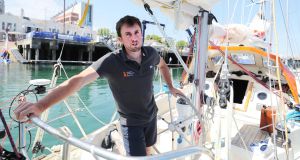 Nine months alone at sea with a barrel of whiskey, Gregor McGuckin is an Irish man on a mission.

Dublin native Gregor McGuckin is taking part in the 2018 Golden Globe Race, a nonstop solo sailing race around the world.

He is the only Irish entrant and if he is successful he will be the first Irish person to ever to accomplish the endeavour.

Glendalough Distillery has supplied Mr McGuckin with a 16-litre barrel of whiskey on board his boat.

They are curious to see what effect the trip will have on the whiskey and hope to get some of it back to sell, if Mr McGuckin manages to leave any.

The 31-year-old has been preparing for the competition for over two years.

“I’m very excited. I’m as prepared as I can be. The best mental preparation I can have is to have confidence in the boat and I do,” Mr McGuckin said.

“The official race line is nine months. I reckon I’ll be able to do it in eight.”

Competitors have to go back to basics with technology similar to what was used in the original race in 1968.

They are not allowed any modern equipment such as electronic navigation systems, water desalinators or MP3 players.

There will be a satellite phone on board, but he can only call the competition headquarters or the medical team in France.

To navigate, he will use a sextant, a tool that uses celestial bodies, such as the sun, to calculate angles.

Mr McGuckin will face many challenges during his endeavour but said the team have anticipated “anything that can go wrong will go wrong” and ensured he has a way to fix them.

There are 18 solo sailors in the race but they also consider themselves a team.

“It’s such a long time away that you can’t be a complete individual in it. If something goes wrong, we help each other,” said McGuckin.

With the help of CJ Fallon and the Marine Institute, a National Primary School programme has been created by McGuckin to “inspire the next generation”.

Primary schools across Ireland will be sent packs to follow McGuckin’s travels as well as lessons on Irish maritime history and the ocean.

To date, the longest he has ever spent alone at sea is two weeks.

Mr McGuckin said his family and friends are “obviously worried” but they are also “very supportive”.

Hanley Energy, his headline sponsors, said: “It’s one of the most courageous things we’ve ever come across.”

Mr McGuckin and his team will go to France on Friday, June 8th, for the final preparations, where he will set sail alone at the starting line in Les Sables d’Olonne, near La Rochelle, on the west coast, on July 1st.