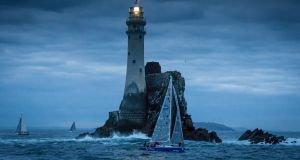 The Commissioners of Irish Lights said on Thursday that a new rotating lantern on the lighthouse will have the same character as the existing light. Photograph: David Branigan/Oceansport courtesy of Baltimore RNLI

The long sweep of the beam from Ireland’s “teardrop” – west Cork’s Fastnet lighthouse – is due to shorten from Monday, the Irish lighthouse authority has confirmed.

However, the Commissioners of Irish Lights (CIL) says it may apply for the lighthouse to secure UNESCO world heritage status – similar to that held by Skellig Michael off the Co Kerry coast.

Plans signaled by the lighthouse authority to change the lantern on the Fastnet, reducing its beam from 27 to 18 nautical miles, created concern among west Cork tourism interests.

Maritime lawyer Michael Kingston also appealed to Taoiseach Leo Varadkar and CIL to retain the original beam as a “symbol of hope” for the Irish diaspora.

Mr Kingston, who is director of the Irish Cultural Centre in London and whose father, Tim, was one of the 50 victims of the Whiddy island oil terminal explosion in 1979, also suggested the Fastnet beam should be maintained as a memorial to all those who have lost their lives at sea.

CIL said on Thursday that a new rotating lantern on the lighthouse will have the same character as the existing light, and would “ continue to provide an essential safety service for mariners as well as being visible along the Cork shoreline from Mizen Head to Castletownshend”.

“The switch to the new light will facilitate commencement of essential structural works which are required to renew the attachment of the lantern room to the masonry structure of the tower,” it said in a statement.

The work would continue until late August, with final completion next summer.

“The works will improve safety and the environmental footprint at the station while having no impact on the outward appearance of the lighthouse,” Irish Lights director of operations Capt Robert McCabe said.

The work involves removing mercury, which maintained the optic lens, and replacing it with a liquid emitting diode.

Capt McCabe said that a “ public consultation process undertaken with the project” had “led to increased consideration of the international importance of Fastnet as a unique example of lighthouse heritage”.

Irish Lights chief executive Yvonne Shields said a report was commissioned from an international expert to explore the world heritage site potential, and the expert confirmed the criteria under which the Fastnet might qualify for Unesco status.

The consultant also “confirmed that the work underway at the site will not impact negatively on this ambition,”she said.

“Irish Lights will work with stakeholders and the community to determine the best way to advance the important heritage value of Fastnet as an international landmark,”Ms Shields said.

Mr Kingston welcomed commissioning independent advice. However, he appealed to Irish Lights to defer removing mercury, which would render the old light inoperable, until time had been allowed to consider the report.

“ If the report is correct and the heritage of the lighthouse is not impacted on by the removal of the mercury . . . then that position will have to be accepted,”he said. “However time is required to look at the report, which is the normal course in any discussion with due process.”

Mr Kingston has said that the Fastnet’s associations with saving many lives, along with its associations with the Titanic and the Lusitania and the Fastnet yacht race, emphasised its special status as “part of the fabric of Ireland, her past, and therefore her future, not just in Ireland but for Irish people all over the world”.

21:25 Joe Biden emphasises unity in first speech as President of the US

2:29 ‘Democracy has prevailed’ - Biden and Harris are sworn in on historic day for the US