‘I have smelt the breath of Satan’: The story of a Co Kerry exorcist

Malachi Martin detailed the four stages of the process of possession

Documentary on the story of Father Malachi Martin from Kerry, a priest that performed numerous exorcisms. Video: Underground films 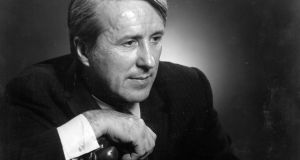 Undated photograph of Fr Malachi Martin. The image was used in his Irish Times obituary in 1999.

“Exorcism can be extremely violent. I have seen objects hurled around rooms by the powers of evil. I have smelt the breath of Satan and heard the demons’ voices - cold, scratchy, dead voices carrying messages of hatred.”

Those words, quoted from the Scotsman newspaper, appear in the obituary of the Co Kerry priest and author Malachi Martin, published in The Irish Times on Saturday, August 7th, 1999.

Martin’s name has been trickling through newsfeeds in recent days ahead of the release of Hostage to the Devil this weekend. The subject of the dark-looking Netflix documentary is Martin and a spirit he confronted in a career as a “Jesuit priest, an author and an exorcist”.

Malachi was born Co Kerry in 1921 to John and Katherine Martin. One of 10 children, he was educated first at Ballylongford National School, Dublin’s Belvedere College and then University College Dublin. According to his obituary, his foray into Jesuit priesthood would take him to Rome in the 1960s. But, in 1964, he requested a release from his vows.

“The move was prompted by his conclusion that many in the church, and particularly in his own order, the Jesuits, were more interested in power than in saving souls,” reads the piece.

He left Rome and moved to New York, where he took odd jobs, including a stint washing dishes and driving a cab, before eventually finding success as an author. He held fast his conservative views of the church, which clearly shone through in his writing, according to the author of the obituary.

Skip to 1976. The Exorcist film has been out for three years - initially to half-and-half reviews, but already accumulating the building blocks of the cult status it would eventually enjoy. Malachi Martin releases a book account of five, he claims, real-life exorcisms; Hostage to the Devil: The Possession and Exorcism of Five Contemporary Americans. Sharing the title of the upcoming documentary, this is his best-known work.

Each case in the book has a title and vivid narrative, based on meetings with the exorcists and excorcees. In one case, “The Rooster and the Tortoise”, a psychology professor, Carl V, became possessed while re-enacting a ritual he had seen himself perform in a vision. He travelled to Aquileia in Italy to carry out the dream he had, which he understood to be a reflection of events that happened in a previous life. A group of students accompanied him to document the process.

Martin describes the physical change that took place as Carl was possessed during the ritual, as described by the people who accompanied him on the trip: “And around the eyes, in a way none of his associates and students could ever explain, there was what they had come to call the ‘twist’-some crookedness, some wry misshapenness, as if the natural contours of skull, forehead, eyes, and ears had been splayed out of kilter by some superhuman force residing in him temporarily with tremendous and awe-full power.” 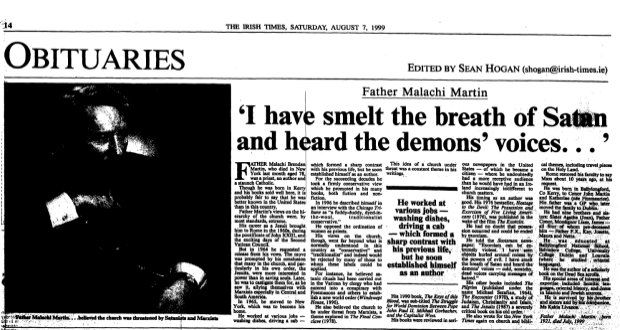 In another case, “The Virgin and the Girl Fixer”, an exorcist named Fr Gregory is attacked by a spirit said to be possessing a transgender woman, whom Martin refers to as “Richard/Rita”. The vivid description of the person in the throes of battle with a malevolent spirit will be familiar to anyone with experience watching horror films.

“The mouth opened, baring gums and throat, the tongue protruded, quivering on a stream of gray foam bubbles,” he wrote. “The whole face was furrowed in irregular lines, as Richard/Rita broke into peals of laughter. Great buffeting gusts of mocking, jeering, Schadenfreude laughter. Laughter pouring from a belly of amused scorn and contemptuous hate.”

In the late 1990s, there was an “exorcist boom”, according to an in-depth report by Anna Mundow published in The Irish Times on July 27th, 2002. In the preface to Hostage, written for its 1999 republish, Martin corroborates this idea, estimating “some 800 to 1,300 major exorcisms, and some thousands of minor exorcisms are performed” annually.

Mundow says cultural, rather than satanic, influences were previously responsible for rises in possession cases. Like The Exorcist before it, in the 1970s Martin’s book “created more exorcism devotees, among them many alienated Catholic priests who condemned the reforms of the Second Vatican Council for giving Satan a free hand.”

In Hostage, Martin’s reputation as a staunch Catholic and his disdain for the Church’s light touch is evident. “Among the general population of Catholics and Christians of other denominations, large numbers of people no longer learn even so basic a prayer as the Our Father,” he writes.

“In churches and parochial schools alike, the subject of Hell is avoided, as one midwestern priest put it, in order not to put people ‘on a guilt trip’. The idea of sin is likewise avoided, according to the same source, in order not to do ‘irreparable damage to what has been taught for the past fifteen years’.”

Martin didn’t buy into any figurative interpretations of evil. He said possession is not “some tale of dark fancy featuring ogres and happy endings. Possession is real: and real prices are paid.”

The four stages of the “process of possession”, are included in his book:

1. “First, the actual entry point, the point at which Evil Spirit enters an individual and a decision, however tenuous, is made by the victim to allow that entry.”

2. “Then, a stage of erroneous judgments by the possessed in vital matters, as a direct result of the allowed presence of the possessing spirit and apparently in preparation for the next stage.”

3. “Third, the voluntary yielding of control by the possessed person to a force or presence he clearly feels is alien to himself and as a result of which the possessed loses control of his will, and so of his decisions and his actions.”

4. “Once the third stage is secure, extended control proceeds and may potentially reach the point of completion-perfect possession.”

It could happen swiftly, or take “years to accomplish” - and the stages may not come in that order.

The trailer for the new documentary says the exorcist is always in danger. Ultimately, Martin said in his best-seller, the exorcist takes the pain for those who are possessed.

“When the rebellion of the possessed person does lead to exorcism, the bitter struggle is brought out into the open,” he wrote. “The exorcist literally offers himself as hostage.”

Hostage to the Devil is out on Netflix on Sunday, January 15th.

This story is part of the ‘Lost Leads’ series - a re-visiting of lesser-known stories that have made the pages of The Irish Times since 1859. What can you find? Let us know @irishtimes. For more information on subscribing to the archive, see here: www.irishtimes.com/archive