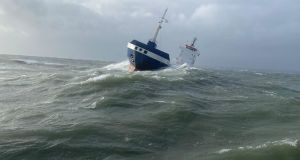 Nine members of a stricken freighter are recovering following a major rescue operation involving three RNLI lifeboats and the Irish Coast Guard in stormy seas off the south east coast.

The ‘Lily B’ cargo ship, which had lost power in heavy seas off Co Wexford on Tuesday afternoon and was drifting dangerously close to Hook Head, has been towed back to Waterford Port at Belview.

The Waterford Port tug, Tramontane assisted by the tug, Bargarth towed the 4,000 tonne freighter into Waterford Port after three RNLI lifeboats had spent several hours getting tows aboard and pulling her away from the rocks.

The RNLI lifeboats from Rosslare and Kilmore Quay in Wexford and Dunmore East in Waterford spent almost 12 hours on the mission, battling stormy seas with Gale Force 8 winds and six metre high waves on Tuesday night and into the early hours of Wednesday.

Neville Murphy, a crew member aboard the RNLI Elizabeth and Ronald from Dunmore East, described the challenges that all three lifeboat crews faced as they fought to prevent the freighter from hitting the rocks until the tugs arrived.

“We watched her for a while and worked out her position re the rocks and the rate of drift so we could work out roughly what time she was going to hit the rocks so we had to act because we knew the tug wouldn’t get there in time.

Mr Murphy said conditions at the time were horrendous with gale force eight winds throwing up six metre waves but great credit was due to the coxswains of all three lifeboats for getting them close enough to get tows aboard.

“We went very close to throw a line aboard but it’s down to the skill and seamanship of the coxswain of the lifeboats and they showed some fantastic skills yesterday that made the operation work - I couldn’t praise them enough.

“Even trying to communicate to the crew in those conditions was difficult and then you are trying to manoeuvre around this 4,000 tonne freighter that was being hammered by the sea while you are being tossed about as well.

“You would be there trying to fix ropes on the back and get things set up for a tow and the next thing there would be a wave come crashing down on your head - you wouldn’t even see it coming at times - that made it really difficult.

“We were able to move her a bit - we were moving at 1 knot - that’s how much we could get with the two lifeboats attached so we managed to bring her away from the danger area for the tug to get set up.”

“It was tough enough during the day in those conditions but when it turns to night, it’s a different ball game because you can’t see the waves coming at you so it’s hard to judge things and it hits you harder at night.

“We were virtually a full 12 hours out there so it was a long shift and the body is fairly wrecked today because it was a serious endurance test but it was a real team effort and thankfully it worked out well in the end.”

The Lily B, which had sailed from Northern Germany with a cargo of coal, will be inspected by Department of Transport Marine Survey Office personnel in Belview and it is understood that all nine crew members are well.