John Gilligan arrested along with two others in southern Spain 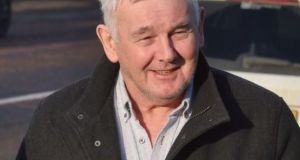 John Gilligan moved to Spain following attempts on his life in Ireland.

Former drugs gang leader John Gilligan has been arrested in the Alicante area of Spain where he moved following attempts on his life in Ireland.

Garda sources said they were aware of Gilligan’s arrest but are still trying to establish why he had been detained by Spanish police on the Costa Blanca.

The Irish Times understands Dubliner Gilligan (68) was arrested with two other men.

One of those men is Irish and has been well known to Gilligan for decades.

The identity of the third man arrested was not clear.

Gilligan has links to Spain where he spent time while running his drugs empire and at one point owned a pub - The Judges Chamber near Alicante - with associates.

Gardaí were making inquiries with the authorities in southern Spain on Thursday in a bid to establish the circumstances of his arrest.

Members of his drugs gang shot dead Veronica Guerin in 1996.

Gilligan was found not guilty of that murder though he was jailed on drugs trafficking charges.

He emerged from Portlaoise Prison in October, 2013, after serving 17 years. Most of that time was served on a drug-dealing sentence, with a short period added for threatening to kill a prison officer.

In early December 2013, when Gilligan had been free for six weeks; two gunmen walked into the Halfway House Pub in Ashtown, north Dublin.

Gardaí believe they were looking for him.

Gilligan was less than 1km away in the Hole in the Wall Pub at the time.

He was formally issued with a warning by gardaí that his life was in danger. For a period he was driven around by a minder in a bulletproof car.

A couple of months later, at the end of February 2014, Gilligan was again targeted. This time he was shot and wounded at his brother’s house in Clondalkin. Photos emerged of him in a wheelchair after the attack and he fled to the UK for a period.

Exactly two weeks after the attack that almost killed Gilligan, Stephen ‘Dougie’ Moran, who had been driving him around in Dublin, was shot dead at his home in Lucan on the evening of March 15th.