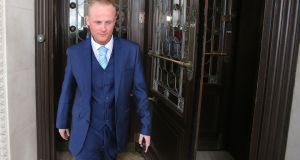 A loyalist activist accused of plotting to subvert a Stormont inquiry into a billion pound property deal intends to call nine witnesses at his legal bid to have the case thrown out, he told a court on Wednesday.

Jamie Bryson wants DUP MLA Jim Wells and the independent Irish MEP Mick Wallace to give evidence in his defence at the attempt to halt criminal proceedings. Police officers are also expected to testify during a hearing to test the strength of the prosecution case before trial.

A judge at Belfast Magistrates’ Court confirmed a date for the Preliminary Inquiry will be fixed next week. Mr Bryson (30), of Rosepark in Donaghadee, Co Down denies a charge of conspiracy to commit misconduct in a public office on dates between September 1st and 24th, 2015. Former Sinn Féin MLA Daithi McKay (38), and party member Thomas O’Hara (36), are accused of the same offence. The case relates to a Stormont probe into the £1.2bn sale of the National Asset Managment Agency (Nama)’s Northern Ireland property portfolio to US investment giant Cerberus.

Mr Bryson has also indicated a potential objection to expert witnesses giving evidence remotely due to the ongoing pandemic.