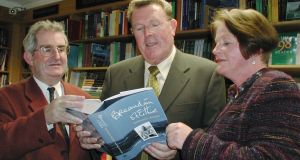 The death has taken place of the renowned writer, broadcaster and academic Liam Mac Con Iomaire. He was 81.

Mr Mac Con Iomaire was Director of the Modern Irish Language Laboratory in UCD where he taught language studies, phonetics and spoken Irish to undergraduate and postgraduate students from 1979 until his retirement in 1996.

Ireland of the Proverb, (Townhouse, 1988), with pictures by Bill Doyle, went on to be an international best-seller, especially in North America followed by Conamara – An Tír Aineoil (CIC, 1997), with pictures by Bob Quinn, a celebratory portrait series of tradition-bearers from Conamara and Árainn.

Born in Casla, Co Galway in 1937, Mr Mac Con Iomaire was educated at Scoil Náisiúnta na nDoireadha. He obtained a scholarship to the Preparatory College Coláiste Éinde in Galway before training to be a teacher in Coláiste Phádraig, Drumcondra.

He taught in Scoil Lorcáin in Monkstown in Dublin between 1957 and 1968. He was recruited by RTÉ as one of their first part-time newsreaders, and subsequently as a journalist and sub-editor in the RTÉ newsroom where he worked between 1968 and 1979.

Public engagement was also a hallmark of his work through broadcasting, especially his role as presenter and chair of the long-running and popular language series Leagan Cainte on Raidió na Gaeltachta.

A founder-member of Sean Nós Cois Life, Liam Mac Con Iomaire also served as a member of An Coiste Téarmaíochta, An Coimisún Logainmneacha and as Uachtarán Oireachtas na Gaeilge.

He is survived by his wife Bairbre (Ní Chearbhaill) and his children Máirín, Máirtín, Colm, Ruairí and Darach. His daughter Nuala predeceased him in 2010.