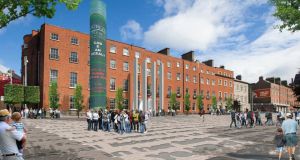 Computer-generated image of the proposed Parnell Square cultural quarter. It is hoped the development will act as a catalyst for the regeneration of the Georgian square and surrounding streets

The €60 million redevelopment of Dublin’s Parnell Square is finally to get under way following the agreement of a major land swap deal between the city council and the Office of Public Works (OPW).

The OPW has agreed to give the council ownership of Coláiste Mhuire, a former school housed in six Georgian buildings at the northeastern end of the square. In return, the council will hand back a seven-acre site on Jamestown Road, previously owned by the OPW.

The deal, due to be ratified by councillors on Monday night, will allow the long-awaited transfer of the city library from the Ilac Centre to Coláiste Mhúire. This will form the centrepiece of a new “cultural quarter”, including a 200-seat auditorium, a new civic plaza linking to the Hugh Lane Gallery, and a public park .

It is hoped the development will act as a catalyst for the regeneration of the Georgian square and surrounding streets, as well as completing what the council calls the “civic spine” leading into O’Connell Street.

Despite being Dublin’s oldest Georgian square, Parnell Square is one of the most neglected parts of the city. Ten years ago the council published a master plan for its redevelopment with plans to convert Coláiste Mhuire into a luxury hotel and develop the Ambassador venue as a “cabaret-type theatre” where dinner would be served with a show.

In 2007, the council changed its mind about the cabaret and decided the Ambassador should be the new location for the city library. However, in 2011 it decided the former theatre was too small.

The Coláiste Mhuire library complex will be more than 11,000 sq m, just more than half of which will be spread over eight Georgian houses, the six school buildings and number 20 and 21 which flank the Hugh Lane Gallery. The new library will be over three times the size of the existing central library, which has been located in the Ilac Centre since the early 80s.

The council is expected to lodge an application for the new development with An Bord Pleanála by the end of this year. However construction is not expected to start until October 2017, with the project due for completion by the end of 2019.

It will also lead fundraising in Ireland and internationally on behalf of the Parnell Square Foundation. The OPW had transferred the Jamestown Road site to the council more than 10 years ago on the condition that it be used for affordable housing, but the scheme was subsequently wound up.