Lipstick on a pig? Why Dublin has failed to pretty-up O’Connell Street 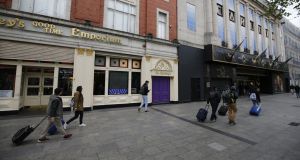 Poor old O’Connell Street. No amount of lipstick has been able to elevate it from the sty. There have been many attempts to pretty-up the capital’s main thoroughfare over the years, but despite the expenditure of considerable funds, O’Connell Street remains unattractive.

In the late 1990s Dublin City Council tried to the take the haggard look off it, pumping millions into widening the central median and footpaths, chopping down the enormous London plane trees and replacing them with neater Oriental planes. A new plaza was installed in front of the GPO, and the Millennium Spire was built.

The revamp was eventually finished in 2006 and while the street looked considerably tidier, the loss off the veil of tall, leafy trees laid bare its many blemishes, starkly exposing the vacant sites and the discount shops, fast-food outlets and amusement arcades – what council chief executive Owen Keegan succinctly describes as “low-grade tat”.

The council had a go at sorting this out, introducing shop front guidelines to prohibit the installation of garish signage, and a “special planning control scheme” banning the opening of any more amusement arcades, bookmakers, mobile-phone shops or “adult entertainment” shops, although it did not have the power to close existing shops.

But all these measures had little effect on Upper O’Connell Street. With the exception of the Gresham Hotel on the east side, which has retained its looks, the street is lifeless and downright ugly.

“There is nothing to sustain pedestrian traffic in the upper reaches of the street. From Henry Street up to Parnell Square, particularly on the west side, it kind of dies,” Mr Keegan says.

A big part of the problem is O’Connell Street’s missing teeth. Two big gaps blight the western side. The most shameful of them is the one directly beside the Carlton Cinema, which has, astonishingly, been vacant since 1979. The other is beside Number 42, the last remaining Georgian House on the street, where the Royal Dublin Hotel was demolished a decade ago as part of developer Joe O’Reilly’s Chartered Land plans for a €1.25 billion shopping centre. These plans are now defunct, with the site’s new owners, Hammerson, planning a mixed-use development.

The site was for years known as the “Carlton site” as originally it was just the cinema and vacant plot and some backlands. It now encompasses almost six acres, including most of the west side of Upper O’Connell Street and Moore Street, and even takes in parts of Parnell Street and Henry Street.

In the 1990s the Carlton Group began amassing a development plot, but did nothing with it. The council stepped in to compulsorily purchase the site. Years of legal wrangling followed, involving Carlton Group members architect Paul Clinton and amusement-arcade owner Richard Quirke, whose Goodtime Emporium still graces the street.

The council eventually gained control of the site in 2007. It had already agreed a resale deal with Chartered Land and, in 2008, the company applied for permission for the development.

That the large enclosed shopping centre, granted permission in 2010, never went ahead is probably a blessing. While Mr Keegan says the new development cannot be assessed until a planning application is made, he welcomes the move away from a “Dundrum shopping centre mark two” to a “much more sensitive development that respects this existing streetscape”.

“I would be very supportive of the direction they are moving in. I think they recognise themselves the type of mega-shopping centre that is closed and inward-looking isn’t sustainable.”

An even closer comparator than Dundrum is the Ilac Centre, the construction of which in the late 1970s obliterated streets such as Little Denmark Street, Cole’s Lane and Riddal’s Row.

“The cultural memory of those streets is at this stage pretty much lost,” Graham Hickey of the Dublin Civic Trust says. “There is a skill in designing a district where the individual streets and lanes have their identity, and a monolithic appearance and blitzkrieg of demolition is avoided.”

Mr Hickey is, however, cautious about welcoming the new development.

“A key concern is that many of the buildings on the upper west side of the street presently only have upper floor facades protected, as the register for this area has not been updated in years. Many of these buildings date to the laying out of Sackville Mall in the mid-18th century.”

Conservation of the original fabric of the street is also a concern for architectural historian Dr Melanie Hayes.

“Specifically I would like to see that the new development surrounding No 42 was readily distinguishable from the historic building fabric in its presentation and not a form of Georgian pastiche,” she says.

“Similarly I would like to see a sensitive and holistic solution to the conservation and restored new use of No 42, that not only revealed its aesthetic and historic value, but was publicly accessible and used for a socially useful purpose.”